"They're not the Razgriz... are they?"
― Yuktobanian Air Force pilot[1]

The Razgriz Air Command Squadron, more commonly referred to as Razgriz Squadron and also known as "The Ghosts of Razgriz", was a secret squadron mostly comprised of the survivors of the OADF's Wardog Squadron in the final month of the Circum-Pacific War.

During its brief existence, Razgriz Squadron was created by and served under the direct command of Osean President Vincent Harling, and was stationed aboard the OFS Kestrel. Under their new mantel as the demonic hero of Strangereal folklore, the Razgriz pilots executed a series of covert engagements, which ultimately led to the war's resolution and the defeat of the Grey Men.

Although it is arguable that the first flight of the Razgriz occurred on December 9, 2010,[2] Razgriz Squadron itself was not officially established by President Harling until the following day, December 10.[3] After Harling's liberation from captivity in southern Belka, the Razgriz pilots were placed under the direct command of the president.

Soon after, the OFS Andromeda received a transmission—intended for the president—that included the coordinates of a location in western Belka.[3] Blaze, now operating under the callsign "Razgriz 1", was dispatched on a reconnaissance mission to the area and found that the Grey Men were preparing to remove nuclear warheads from the storage facility beneath Mount Schirm. Blaze was sighted, and during his escape, he was pursued by members of Ofnir and Grabacr Squadrons, which were marked with both Osean and Yuktobanian Air Force emblems. Blaze ultimately managed to escape the airspace and delivered the reconnaissance photographs he had obtained.[5]

Two days later, the president dispatched Razgriz Squadron to destroy the mine's entrance, thereby sealing the weapons inside. However, by that time, three nuclear warheads had been already removed and sent to the Belkan aggressors operating in Osea and Yuktobania.[4]

On December 16, the Andromeda received another coded transmission, which indicated the location of the nuclear warhead that had been delivered to Yuktobania. When the Razgriz pilots arrived at Payavlenie Ravine, they discovered that the bomb had been acquired by the Yuktobanian resistance, which was attempting to disarm the warhead. However, the area was covered by Yuktobania's anti-aircraft defense network; to make matters worse, the Varyag Special Forces were actively scouring the ravine in an attempt to recover the warhead. After they had eliminated the Yuktobanian forces, the Razgriz were engaged by Ofnir Squadron. Following a heated pursuit, the Razgriz shot down the Ofnir fighters and then escorted the resistance's submarine out to sea to dispose of the dismantled warhead.[6]

"Black bodies, that emblem... It's them! The 'Ghosts of Razgriz!' The survivors from the Ofnir Squadron told me about 'em!"
― Adler to Schenze[7]

Three days later, on December 19, at approximately 1309hrs, the Razgriz attacked the Arkbird spacecraft, which had been commandeered by the Belkans to execute a nuclear strike against Okchabursk, Yuktobania. Despite the Arkbird's considerable defensive capabilities, the Razgriz shot down the "White Bird", which crashed into the Ceres Ocean, preventing the nuclear attack.[7]

On December 22, the Razgriz flew to Yuktobania's Pobeda Peninsula to support the resistance's effort—spearheaded by Captain Jack Bartlett—to rescue the deposed prime minister of Yuktobania, Seryozha Viktrovich Nikanor. At 0705hrs that day, the Razgriz provided top cover for Bartlett's convoy as it approached Krylo Airfield. As Bartlett, his former lover, and the prime minister took off in a commandeered C-1 Trader, Grabacr Squadron entered the airspace and attempted to destroy their getaway plane. The Razgriz quickly engaged the Grabacr fighters, which were eventually shot down, allowing Bartlett to successfully escape with the prime minister to the safety of the Kestrel.[8]

One week later, on December 29, the Kestrel and its fleet were intercepted by a large armada of Yuktobanian warships. The Razgriz were quickly scrambled to sink the hostile fleet and protect three Yuktobanian loyalist destroyers that had defected upon receiving orders to execute their prime minister. Despite the hostile fleet's impressive firepower and anti-air weaponry, the Razgriz sank the Yuktobanian armada. When a passing Osean nationalist fleet stumbled upon the battle and opened fire, the Razgriz sank the hostile Osean vessels as well.[1]

"How could we have come to this? It's them... They've dragged us all into this—the Wardog ghosts, the Ghosts of Razgriz."
― Major Allen C. Hamilton[9]

The next day, the Razgriz pilots were briefed on the Belkans' secretive development of V2, and the Grey Men's acquisition of the SOLG attack satellite. During the briefing, the Kestrel was hit by two Yuktobanian submarine-launched missiles[10] but the Razgriz managed to launch from the fatally-damaged carrier before it sank. Razgriz Squadron then flew to Sudentor, North Osea, where Gründer Industries had constructed the SOLG's control facility within a tunnel beneath the Waldreich Mountains.[11]

As the Razgriz approached the city, they were joined by several Osean and Yuktobanian military units, which had been swayed by Harling's and Nikanor's joint address that exposed the war's true instigator.[11] The Razgriz and their new allies were supported by a Yuktobanian AWACS, callsign Oka Nieba. During the ensuing battle, the combined force confronted Gründer's numerous defensive positions as well as the remaining Osean and Yuktobanian warmongers, which were contending for the last Belkan nuclear warhead.[9]

Despite encountering intense air-aircraft fire, the Razgriz provided close air support for the friendly ground forces as they fought their way towards the tunnel control facility. Once the control facility had been captured, the ground forces opened the shutter doors sealing the tunnel entrance, allowing the Razgriz to fly into the complex. With the help of Bartlett, the Razgriz destroyed the SOLG's control modules and, through an impressive display of precision flying, escaped the tunnel before it was destroyed by the ensuing explosion.[9]

Destruction of the SOLG

Although the war was officially over, the SOLG's fail-safe had initiated a controlled descent into the atmosphere, putting the satellite on a collision course with the Osean capital, Oured.[13]

At 0606hrs on the morning of December 31, Razgriz Squadron was dispatched on what would be its last recorded combat sortie. After launching from a makeshift runway on one of the city's highways, the Razgriz set out across Oured Bay towards the SOLG's calculated descent point. Several minutes into their flight, the Razgriz pilots were confronted by a double-squadron formation consisting of Ofnir and Grabacr. The ensuing dogfight concluded with Razgriz Squadron shooting down the Belkan aggressors before finally engaging the SOLG.[13] Despite the SOLG's formidable size and lethal fragments breaking away in midair, the Razgriz destroyed the falling satellite and its V2 warhead, which were safely vaporized in a blinding explosion far above Oured.[12]

After the success of Operation Arcadia, the Razgriz pilots disappeared into history and never flew in the skies of battle again. In 2013, at the Osean Federation Council Meeting, President Harling announced all government records on the "Belkan Conflict" would be released to the public in 2020. Until then, however, speculation abounds regarding their true identities, and publications such as the OBN Journal have produced articles exploring the subject.[14]

After he and the Wardog pilots were accused of espionage, Pops was brought aboard the Kestrel along with his fellow fugitives.[15] He assumed the role of Razgriz Squadron's operational commander, overseeing mission briefings and providing the pilots with intel from the Kestrel's Command and Information Center (CIC).[2] Following the Kestrel's sinking on December 30, Pops was brought aboard the Andromeda and continued to support Razgriz Squadron's operations by relaying tactical information to AWACS Oka Nieba.[9]

A Razgriz fighter parked in the OFS Kestrel's hangar 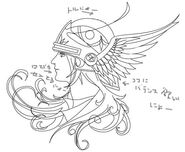 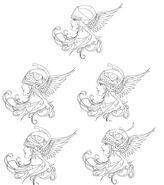 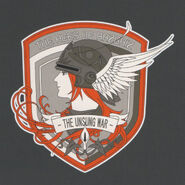 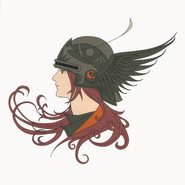 Aces of Razgriz artbook page
Add a photo to this gallery

Retrieved from "https://acecombat.fandom.com/wiki/Razgriz_Squadron?oldid=264004"
Community content is available under CC-BY-SA unless otherwise noted.