"I think... I see the Reaper coming for me."
― Aigaion pilot during Far Eastern Front

The history of Reaper prior to joining Arrows Security is unknown. In early 2019, he participated in a training mission at the former Marine Corps Air Station Miramar in San Diego, which had been repurposed as a mercenary training facility, before formally joining the PMC as the fourth member of Bone Arrow Squadron. His position had been formerly assumed by another rookie, whom Viper accused Goodfellow of killing in a previous operation because of excessive pressure over performance.

Reaper's first mission with the squadron took place in May 2019, when he was deployed along with Omega to intercept unmanned drones over Tokyo, preventing further damage to the city during the following MQ-90 Quox attack. Days after the incident, he and his comrades were sent to intercept Il-76 Candid cargo planes of unknown origin over the Comona Base aerospace center.

During operations in Eurasia, he assisted in the UNF's attempt to free the Greymen held in Iyuli, which was later revealed to be a ruse devised by the terrorists. The anti-asteroid weapon Stonehenge Type-3 was taken down by Reaper shortly after. In Operation Override, he was one of a number of fellow UNF pilots launching the attack against the newly-formed USEA Federation. During the operation, he took down one Aigaion-class heavy command cruiser and a mysterious white CFA-44 Nosferatu which happens to have a number of laser-equipped MQ-90s as its escorts.

Shortly after Viper's retirement, he became captain of the Bone Arrow Squadron, which was merged with the rival Ridgeback Squadron under the unit of the newly-formed Task Force 118. During Operation Point Blanc, he succeeded in stopping USEA from launching an intercontinental ballistic missile onto Washington, D.C. from the Avalon Dam missile facility in Russia. In Operation Battle Axe, he took down another mysterious Nosferatu (which was later revealed to be an unmanned aerial vehicle called the QFA-44 Carmilla). In Operation Bunker Shot, he became one of the spearheads for the invasion of USEA territory. 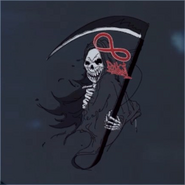 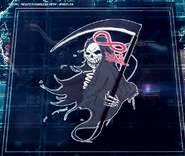 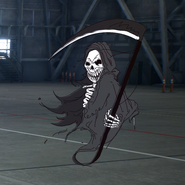 Reaper facing off against Camilla

Reaper's helmet
Add a photo to this gallery

Retrieved from "https://acecombat.fandom.com/wiki/Reaper?oldid=263953"
Community content is available under CC-BY-SA unless otherwise noted.