Ace Combat 3: Electrosphere (Japan)
Rena Hirose (紘瀬玲名), commonly referred to as Rena (レナ),[5] is a Usean fighter pilot who works for the Universal Peace Enforcement Organization (UPEO) as the flight leader of the Special Armed Response Force (SARF). She suffers from the rare Silverstone disease but is recognized as a prodigious ace pilot. She joined General Resource Limited at a young age before leaving for UPEO. 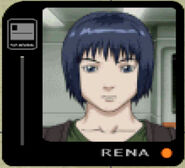 Retrieved from "https://acecombat.fandom.com/wiki/Rena_Hirose?oldid=260044"
Community content is available under CC-BY-SA unless otherwise noted.