Launchers have made numerous appearances in the Ace Combat series.

Launchers have seen moderate use by various armies in the Strangereal universe, but how far back their deployment goes is unknown.

Launchers were sporadically used by the Usean Rebel Forces during the Usean coup d'état.[1]

Launchers were used by the Estovakian Army during the Emmeria-Estovakia War.[3]

Launchers were prominently utilised throughout the Aurelian War by the Leasath Ground Forces, particularly by their special forces.[4] Their most notable use was right after Griswall's liberation by Aurelia, where the Skylla Unit launched an unsuccessful attack on the Aurelian Liberation Corps using the vehicles' cruise missiles.[5]

Erusea utilized rocket launcher trucks during the Lighthouse War to an unknown extent.[6] 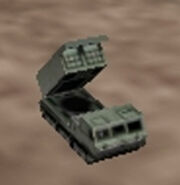 An M270 MLRS of the Usean Rebel Forces 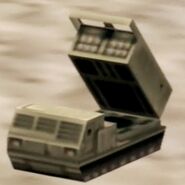 An M270 MLRS of the Yuktobanian Army

Retrieved from "https://acecombat.fandom.com/wiki/Rocket_launcher_truck?oldid=243028"
Community content is available under CC-BY-SA unless otherwise noted.