Ace Combat 5: The Unsung War
Ace Combat X: Skies of Deception
Ace Combat: Joint Assault
The S-32 was a conceptual fighter aircraft. It was a paper-only concept airframe of the Su-47 Berkut technology demonstrator, which never materialized as an actual fighter. A "predecessor" of the Berkut, the main differences between both aircraft lie in the S-32's inner-cranked vertical stabilizers, engine design and Sorbtsiya wingtip mounted ECM pods.

It debuted in Ace Combat 5: The Unsung War and made subsequent appearances in handheld titles.

In the Strangereal world, the S-32 saw limited use.

Free Erusea used at least one S-32 during their 2006 Uprising. It was shot down by Mobius 1 over White Valley.[1]

In the Circum-Pacific War, the S-32 was used by both the Ofnir and Grabacr Squadrons against Razgriz Squadron during the descent of the SOLG towards Oured Bay.[2]

Near the end of the Aurelian War, the S-32 was operated by the elite Alect Squadron to reach Archelon Fortress in order to pilot Leasath's new experimental aircraft, Fenrir.[3]

"A prototype of the Su-47, this aircraft has incredible mobility."
― Hangar 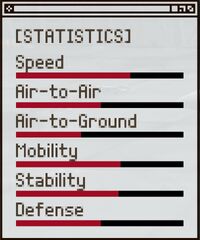 "A prototype of the Su-47, this aircraft has incredible mobility."
― Hangar 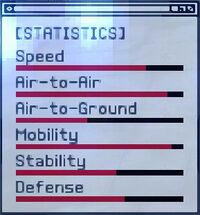 "A prototype of the Su-47. Despite its outstanding maneuverability, development was discontinued. Its potential as an extraordinary fighter is limited only by the skill of its pilot."
― Hangar