Ace Combat 5: The Unsung War
Ace Combat Infinity
Ace Combat 7: Skies Unknown
The SLUAV (Submarine-Launched Unmanned Aerial Vehicle)[1] is a specialized UAV designed for use by Scinfaxi-class submarines and Alicorn-class submersible aviation cruisers. Depending on the application, SLUAVs can defend the submarine by firing on hostile units[2][3][4] or act as marker drones for long-range attacks.[5]

The Union of Yuktobanian Republics developed the Hrimfaxi to feature unmanned technology, reducing its crew size compared to the Scinfaxi.[6] This included submarine-launched UAVs that would defend the Hrimfaxi from attack, as compared to the VTOL hangar utilized by the Scinfaxi, which necessitated aviation crews and pilots aboard. During the Osean Federation's Operation Long Harpoon during the Circum-Pacific War, the Hrimfaxi launched the SLUAVs to defend itself from Wardog Squadron. Wardog shot the UAVs down and caused the remaining ones to lose their guidance after sinking the Hrimfaxi.[2]

The Alicorn, a successor of the Scinfaxi-class submersible carriers, also carried these same SLUAVs. In contrast to the Hrimfaxi's strictly point-defense UAVs, the Alicorn's SLUAVs were also capable of acting as terminal guidance for a powerful rail cannon onboard the Alicorn. Captain Matias Torres ordered the use of this railgun and the SLUAVs over Anchorhead as a guided artillery fire drill in preparation for a future nuclear strike on Oured. It was also an attempt to neutralize remaining Erusean forces during the Long Range Strategic Strike Group's raid on Anchorhead.. The SLUAV-guided railgun shots managed to damage Húxiān's aircraft, forcing her to retreat, but otherwise Strider Squadron was unaffected.[5]

SLUAVs were later utilized by the Alicorn for a second time during Operation Fisherman, this time tasked as interceptors alongside the manned Rafale Ms of the submarine's air wing. They were initially tasked with shooting down Specter Squadron's fleet of anti-submarine patrol aircraft, but failed when the LRSSG successfully defended the squadron during their attempt to drop sonobuoys. After the Alicorn was forced to surface, SLUAVs were launched in large numbers in tandem with SACS to serve as a distraction while the submarine fought back with its rail guns and anti-aircraft systems. Ultimately, this effort was unsuccessful, and all of the drones in the air self-destructed following the destruction of the Alicorn at the hands of Trigger.[4]

SLUAVs were deployed by Scinfaxi-class submarines in various operations during the UNF's Operation Eternal Liberation.[3] 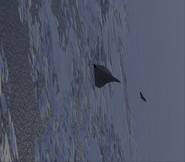 Retrieved from "https://acecombat.fandom.com/wiki/SLUAV?oldid=261029"
Community content is available under CC-BY-SA unless otherwise noted.