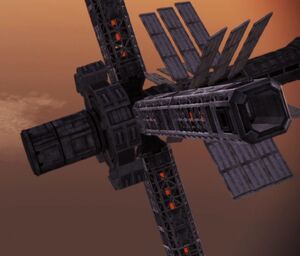 The SOLG program was an abandoned program performed by an unknown country during the aftermath of the Ulysses Disaster. It led to the creation of various combat satellites, which would later be commandeered by the USEA Federation during Operation Eternal Liberation. These satellites were attempted to be dropped onto the Earth in a massive terrorist attack, but it proved to be a failure thanks to the United Nations Forces's mercenaries.[1]

The SOLG program involved the creation of military combat satellites equipped with kinetic energy weapons.[1] Such weaponry would be able to perform kinetic bombardment from anywhere in the world using various metal rods equipped on the bodies of the satellites; however, for some reason, the project was abandoned[1] and the satellites left in orbit.

During Operation Eternal Liberation, the USEA Federation came in control of the various satellites. The kinetic platforms were out of commission, so they decided to drop the satellites onto Tokyo to cause massive damage to the populace. The United Nations Forces responded by deploying their mercenary forces to destroy the incoming satellites. Thus far, all of the satellites commanded to fall have been destroyed, likely falling into Tokyo Bay and causing no damage to the city.[2][3][4]

Three satellite designs were created as part of the SOLG program, from which numerous units were developed.

SOLG -Schroeter-, named after Johann Hieronymus Schröter, is the base unit. Schroeter features various kinetic weapon launchers, as well as its own defensive laser system. These lasers protect the satellite from both enemy attack as well as space debris. However, of the three designs, Schroeter features the least armor and has proven easy to destroy by the UNF.[2]

SOLG -Lexell-, named after Anders Johan Lexell, is the most upgraded version of the project's satellites. Lexell continues the trend from Oort and retains all of the original weaponry while featuring a further upgraded exterior shell to protect against most damage. Its design displays a gold trim.[4]

While they appear roughly the same on the surface, all three SOLGs differed greatly from the strangereal variant.

Durability: While the strangereal SOLG could be destroyed simply by destroying the panels followed by the core, the real world SOLGs requires a lot more steps to destroy. First the mercenaries needed to destroy the SOLG's solar panels (like the strangereal solg). Once that was done however, they would need to destroy the kenetic artillary reserves, something Razgriz did not need to do. Third the core needed to be destroyed, much like the strangereal SOLG. While this would have destroyed the strangereal SOLG, in these battles there was one final step: flying inside of the solg's barrel and destroying the core from within. Not only was this a requirement rather than simply an alternate way to destroy the SOLG, this was also impossible to do this before the destructino of the core in the real world variants since all 3 had special doors blocking access to the inside until it was blown apart shortly after the destruction of the core.

Defenses: The strangereal SOLG was utterly defenseless when intercepted by Razgriz. It boasted no external defenses and its only fighter protection had been destroyed prior. In the real world, not only did all three SOLGs boast laser defense systems (originally designed to destroy astroid debris), but the mercenaries also had to contend with USEA fighters during the battle itself rather than before it. The third even had a squad of ADFX-01 Morgans to defend it.