The SOLG program was an abandoned program performed by an unknown country during the aftermath of the Ulysses Disaster. It led to the creation of various combat satellites, which would later be commandeered by the USEA Federation during the USEAn War. These satellites were attempted to be dropped onto the Earth in a massive terrorist attack, but it proved to be a failure thanks to the United Nations Forces' mercenaries.[1]

The SOLG program involved the creation of military combat satellites equipped with kinetic energy weapons.[1] Such weaponry would be able to perform kinetic bombardment on anywhere in the world using various metal rods equipped on the bodies of the satellites; however, for some reason, the project was abandoned[1] and the satellites left in orbit.

During Operation Eternal Liberation, the USEA Federation came in control of the various satellites. The kinetic platforms were out of commission, so they decided to drop the satellites onto Tokyo to cause massive damage to the populace. The United Nations responded by deploying their mercenary forces to destroy the incoming satellites. Thus far, all of the satellites commanded to fall have been destroyed, likely falling into Tokyo Bay and causing no damage to the city.[2][3][4][5]

Four satellite designs were created as part of the SOLG program, from which numerous units were developed.

SOLG -Schroeter-, named after Johann Hieronymus Schröter, is the base unit. Schroeter features various kinetic weapon launchers, as well as its own defensive laser system. These lasers protect the satellite from both enemy attack as well as space debris. However, of the four designs, Schroeter features the least armor and has proven easy to destroy by the UNF.[2]

SOLG -Lexell-, named after Anders Johan Lexell, is a further upgraded version of the project's satellites. Lexell continues the trend from Oort and retains all of the original weaponry while featuring a further upgraded exterior shell to protect against most damage. Its design displays a gold trim.[4]

SOLG -Gould-, named after Benjamin Apthorp Gould, is an even heavier upgraded version of the project's satellites. Gould continues the weaponry trend of the previous satellites, but features an even stronger exterior shell, allowing it to survive a massive amount of damage. This satellite is unique in featuring obstructing walls inside the artillery shell barrel, requiring careful flying. Gould's design displays a pitch black trim.[5]

A Typhoon and an F-2A attacking SOLG -Oort- 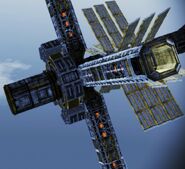 SOLG -Lexell-
Add a photo to this gallery

Retrieved from "https://acecombat.fandom.com/wiki/SOLG_program?oldid=242397"
Community content is available under CC-BY-SA unless otherwise noted.