The SRN was an armed insurgent group which participated in the New Russian Federation uprising in late 2015. The group played a major part in the first stages of the war, being used as a pawn by the Blatnoi organization's plans to establish their "New Russian Federation".

Sometime during 2015, the Blatnoi plotted to launch a coup d'état to overthrow the Russian government and place themselves as heads of state, planning to use the stockpile of prototype Trinity missiles to achieve their goal.

In exchange for receiving materials to construct Trinity, the Russians established an alliance with insurgent groups in Africa, providing them with logistics support and hardware. Using their newly acquired power, the SRN began launching attacks in east Africa, easily overpowering the governments of the region. In response to the attacks, NATO began operations in the area, establishing the elite international unit Task Force 108 to counter the threat.

The SRN were first encountered by Task Force 108 during the invasion of a rebel-controlled town in December 21 of that same year, which ended in the first battlefield deployment of Trinity. Hours after the settlement attack, SRN aircraft attacked TF108's air base in Hamada, being driven off after causing heavy damage to the base and the nearby oil field. In the following days, rebel forces were engaged during a mission to rescue Russian major Sergei Illich from captivity in December 22, a ground assault in Mogadiyu in the 23rd, and the assault (and Trinity bombing) of Carruth in the 24th.

Days later, after the focus of NATO had shifted to the Russian Federation after the coup of the NRF, several groups of rebels were fought by Nomad Squadron and Shooter Squadron during an inspection mission in the Egyptian Suez Canal, but were defeated in the ensuing battle. After the events at Suez, they were never seen or heard of in the rest of the war.

Technical Pick up with Machine Gun 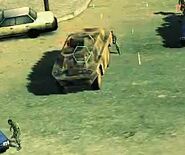 BRDM-2
Add a photo to this gallery
Retrieved from "https://acecombat.fandom.com/wiki/SRN?oldid=225066"
Community content is available under CC-BY-SA unless otherwise noted.