6 minutes
STONEHENGE RETURNS I is a Special Raid mission in Ace Combat Infinity that only appears after completion of an Online Co-Op Mission. It takes place at Stonehenge Type-3. The premise involves the reactivation of the Stonehenge railgun system, requiring players to destroy it once more.

The surface-to-air railgun, "Stonehenge", has started functioning again. Its massive destruction power is causing serious damage to our forces. We need you to head to Turkey immediately and destroy Stonehenge. The enemy will be jamming the surrounding airspacevia facilities on the ground, making it impossible for you to cause damage to Stonehenge until they are destroyed. The purpose of this mission is to completely destroy these facilities and the surface-to-air railgun.

Players spawn at the southeast corner of the map. Stonehenge is located roughly in the center of the map, and will immediately commence firing on all players. All eight railguns are active, and Stonehenge's fire now blankets the sky at all altitudes within the damage range, forcing players to avoid the blast radius completely.

Radar jamming facilities consisting of three radar towers defended by multiple AA guns and SAMs are set up in four locations, one on each corner of the map. The players' first objective is to destroy the radar towers to clear the jamming.

Soon afterward, five MiG-31B Foxhounds will enter the airspace from the northwest. Players must shoot down all five of these aircraft.

After all aircraft are shot down, the three jamming towers in the middle of Stonehenge can be damaged. All three towers must be destroyed to continue with the mission.

Finally, players must destroy all eight Stonehenge railguns to complete the mission.

To finish the mission with an S rank:

The results of this operation were significantly less than Command expected.
So long as Stonehenge remains in play, our forces will remain at a serious disadvantage.

Your actions have silenced Stonehenge again.
This will surely impact the enemy's operations within the Turkey region now.

Your exemplary flying has aided in completely silencing Stonehenge.
With the threat of Stonehenge removed, the superiority of our forces in the region is becoming more established. 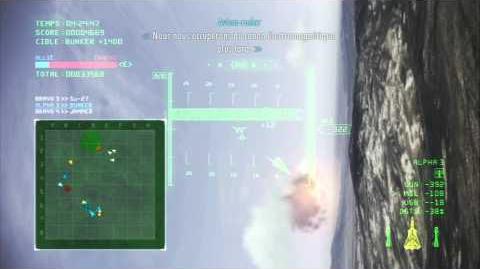 Retrieved from "https://acecombat.fandom.com/wiki/STONEHENGE_RETURNS_I?oldid=224494"
Community content is available under CC-BY-SA unless otherwise noted.