6 minutes
Satellite Interception I is a Special Raid mission in Ace Combat Infinity available at random to players during Online Co-Op Missions. Players are tasked with destroying the SOLG -Schroeter- military satellite before it crashes into Tokyo and causes catastrophic damage.

We have reports that the abandoned military satellite, "SOLG -Schroeter-", has started a descent toward the center of an urban region. The details are still being confirmed, but it is apparently an attempt by the enemy to cause catastrophic damage. Your mission is to destroy the SOLG as it falls and minimize impact damage. We also have reports that enemy air forces have been deployed in the region, and the operation is expected to be an extremely difficult one. All units, be fully prepared for this mission.

Players spawn above Tokyo Bay, each team on each side of the radar, as SOLG -Schroeter- begins to fall towards the city. Four sets of targets must be destroyed, starting with Schroeter's Solar Array Wings (SAWs) and exterior MAG panels. Both the SAWs and MAG panels should prove easy to destroy. All of these will fly backwards towards the players when they break off after being destroyed, and a large and damaging fire will begin at the front of the satellite after some SAWs are destroyed, so players must exercise caution to not get physically damaged.

After all SAWs and MAG panels are destroyed, all of Schroeter's Kinetic Energy Weapon (KEW) shells will be target-able. Its Tactical Laser System defenses will activate, however, so players must avoid being damaged by the lasers as they engage this set of targets. Smaller panels will also start falling off of Schroeter, just as damaging as the previous panels. About halfway through destroying the KEW shells, a squadron of Su-47 Berkuts will enter the area and engage the players. These are not mission-important, but should be destroyed for the S rank.

After the four core units are destroyed, the back of the satellite will open up, allowing players to destroy the special artillery shell located within Schroeter. Destroying this will bring an end to SOLG -Schroeter- and complete the mission.

The mission ends when time runs out or when the special artillery shell is destroyed, whichever comes first.

An S Rank is achieved on Satellite Interception I if all players can get a combined 200,000 points and destroy all mission-important targets, including the special artillery shell within the satellite.

Achieving the S Rank is mostly dependent on all players doing their best to destroy all of the targets on the satellite as swiftly as possible, to allow enough time for everything to be destroyed. To achieve the required points, and to make it easier to destroy the mission-important targets, players should try to engage the laser units and the Su-47 Berkuts whenever possible.

We were unable to completely destroy SOLG -Schroeter- and the operation ended in failure. All we can do now is pray that the separate allied unit that will take over the mission will be able to keep damage to a minimum.

Luckily we were able to at least alter the trajectory of the target, keeping damage to a minimum. Things will be quiet for the time being, but the enemy forces still remain.

Your actions directly resulted in the destruction of SOLG -Schroeter-. With practically zero damage caused by its fall, the results of this operation can be regarded as a complete success.

SOLG -Schroeter- has been completely destroyed, and the enemy forces that were running interference have also been wiped out. Your swift and accurate actions have resulted in the complete elimination of this threat. 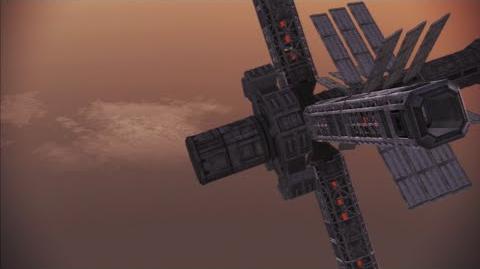 Retrieved from "https://acecombat.fandom.com/wiki/Satellite_Interception_I?oldid=224500"
Community content is available under CC-BY-SA unless otherwise noted.