The Shooting Star Squadron was a division of the Erusean Army. They were specifically tasked with operating Stonehenge during its engagements with the Ulysses 1994XF04 asteroid, and likely continued to operate the railguns during the entirety of the Continental War.[1][2] 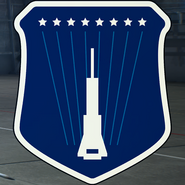 The squadron's emblem in Ace Combat 7: Skies Unknown
Add a photo to this gallery

Retrieved from "https://acecombat.fandom.com/wiki/Shooting_Star_Squadron?oldid=255741"
Community content is available under CC-BY-SA unless otherwise noted.