This article is about an in-game mission. For the in-universe event, see Operation Lagoon.

Squadron of the Far West (極西の飛行隊)

"Shut your mouth and fire back!"
― Jack Bartlett

Shorebirds is the first campaign mission of Ace Combat 5: The Unsung War. While attempting to force a spy plane to land, the player is ambushed by unknown enemy fighters and must shoot them down.

Perrault: At ease, people...but don't get too comfortable. It's a grave situation for all of us right now. Let's get this briefing started.

Briefing Officer: Another aircraft of unknown origin has entered Osean Federation airspace. We have confirmed the target type as a strategic recon plane flying at very high altitude. Despite our repeated warnings, it continued to penetrate our ADEZ and was fired upon by Osean Coastal Defense Force SAMs. We believe one of our SAMs damaged the unknown plane, but did not destroy it. Radar shows that the aircraft is currently losing altitude, and is attempting to egress feet wet towards the ocean. Intercept this target and force it to land for identification. Do not fire upon this aircraft until further orders are transmitted.

The primary focus of the mission is to follow and force a spy plane of unknown origin to land. Destroying it fails the mission. After a short time, four MiG-21bis fighters will appear from the west and attack, but cannot be targeted due to AWACS Thunderhead ordering the player to not fire.

After Heartbreak One gives permission to open fire, the four fighters become marked as TGTs and the player must shoot them down. Once they are shot down, another wave will spawn. This continues until the recon plane crashes or four waves spawn, whichever comes first, after which no more waves will appear. Shooting down all planes in the final wave ends the mission.[1]

The following enemy lists have been verified with the Ace Combat 5: The Unsung War Perfect Guide.[1]

Achieving an S rank on this mission requires earning 1,760 points. If the player shoots down two waves, they will have enough points for an S rank.[1]

To all Sand Island Base personnel:
1. All information regarding today's hostile encounter is to be classified.
2. Captain Jack Bartlett is ordered to report to base headquarters immediately. 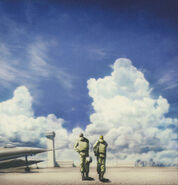 Ace Combat 5 Mission 1 overture (in 16:9 full screen)
Add a photo to this gallery

Retrieved from "https://acecombat.fandom.com/wiki/Shorebirds?oldid=260904"
Community content is available under CC-BY-SA unless otherwise noted.