View source
watch 02:30
Dead Cells Final DLC - The Loop
Do you like this video?
Play Sound
pencil
All right, gentlemen, it's time to clean house!
This article or section may require a cleanup to meet Acepedia's quality standards.

Midnight Assassin (6A); Bear Tracks (6B)

Scarface One
Sledgehammer is the 7th mission of Ace Combat 2. In this mission, Unified Command is planning to launch a bombing raid at the coup d'état forces' shipbuilding complex at Axel Bay. The player's mission is to assist the bomber squadron participating in the bombing run and dispose of any threats, airborne or otherwise, to the operation.

"A bomber unit is to attack the enemy ship building facility after finding an opening when the enemy front unit retreats. We want you to escort the bomber unit for this operation.

As you know, this ship building facility is an important strategic base for the enemy’s carrier mobile fleet and supply ships. Escorting our bomber unit is your first priority, but try to sink as many enemy warships as possible. We wish you luck!" 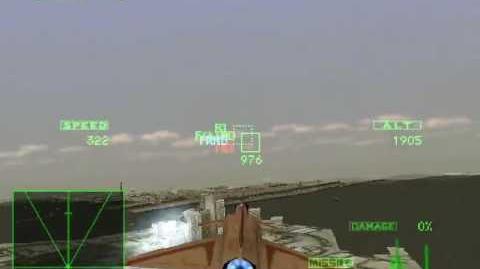