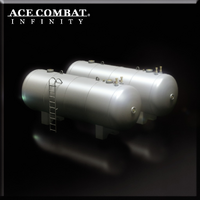 The Sortie Fuel system is a unique gameplay mechanic to Ace Combat Infinity that restricts the player to participating in a number of missions equivalent to how much fuel they own. All missions in Infinity in every game mode, except Test Flight, require the use of one fuel per mission.

There are two types of fuel: Supplied Fuel and Stocked Fuel.

Stocked Fuel is earned through Challenges, from random drops, or by purchasing it with real money. Stocked Fuel is unlimited, but does not automatically regenerate. Using Stocked Fuel will award slightly extra credits and will automatically add some bonus research to the aircraft the player uses within that mission, but there are no effects on the mission itself whether Stocked or Supplied Fuel is used.

The current non-sale prices for Stocked Fuel, as well as how much you save on each pack as opposed to purchasing 1 unit of fuel over and over, are as follows:[1]

The $ sign applies for US Dollars and Canadian Dollars.

One-week-long discounts on Stocked Fuel have taken place sporadically to promote certain tournaments in Infinity. Typically, these discounts reduce the prices of 11 Stocked Fuel and 60 Stocked Fuel in all regions by 20%. (This does not mean 20% is added to the discount percentages in the table above. Rather, this 20% is discounted from the price itself.)

Prior to April 2016, Forced Sortie was mostly restricted to weekends, allowing users to use up to 3 fuel per mission. Sometimes these Forced Sortie events were extended or took place in the middle of the week. When special 6x Supplied Fuel events took place, players could also use up to 6 fuel in Forced Sortie.

The rewards for using different fuel amounts are as follows: