From Above: Spring 2009 was a special From Above issue published in Spring 2009. It focused on various locations in Osea and Yuktobania.[1] Below is a translation of the original Japanese text.[2]

Quarterly Publication "FROM ABOVE" 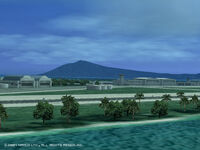 A solitary island floating near the border. Osean territory. A detachment sent by the Osean military provides surveillance of its territorial airspace and waters. This island is designated as a national wildlife conservation area by the Osean Ministry of the Interior. 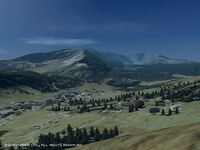 Within the sprawling verdant and magnificent scenery lies a town formed around an engineering college that has stood since ancient times. This region is well known as a tourist spot due to its mineral-rich wells and many health resorts. 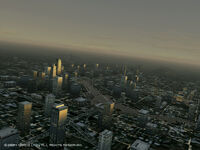 Called "Mile City" due to being located on highlands 1 mile above sea level. Prospering following the discovery of gold and silver mines, it became a city centered on commerce, industry, and tourism. In the center of the city is a giant stadium that can hold 70,000 people. 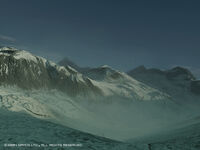 A mountain range that cuts across the eastern side of Yuktobania. The summit, surpassing 8000 meters, is subject to harsh weather conditions above wind force 10. As such, there still exists many untouched areas. 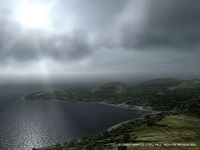 Located in the southeastern region of Yuktobania and jutting out towards the Pacific Ocean, Bastok Peninsula is in close proximity to the equatorial high temperature and humidity zone. Being as such, there are many trees growing rampant near the coastline. Due to being located closest to Osean territory, this has also become one of Yuktobania's defensive positions. 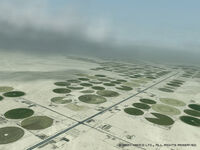 The green circles that can be seen in the central Yuktobanian desert are central pivot irrigation systems that use underground water veins. The radius of the arm reaches 2 kilometers. Utilizing their abundant energy as an oil producing country, this is perhaps a symbol of large-scale collective agriculture.

Covering northern Yuktobania, the Payavlenie Ravine is complexly formed by steep cliffs. As this is a metamorphic rock zone where continental collision took place, there exists a mining operation for many types of ores here. 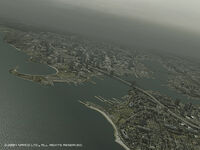 The college town of Bana City, located in the southeastern regions of the continent is well known for its history of being the capital from which Osea originated, as well as being the host to many research institutions and cultural facilities. The river flowing through the center of the city is spanned by a number of bridges, connecting the old town and new city. 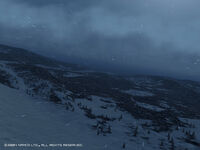 While this region is subject to Mediterranean, humid subtropical, and west coast oceanic climates, it also holds traits of inland climate at the same time due to many mountainous areas. Winter average temperature is around 0 degrees, at night it is a frozen land where the temperature cools down to as much as minus 20 degrees, inhibiting human settlement.

Retrieved from "https://acecombat.fandom.com/wiki/Spring_2009?oldid=214421"
Community content is available under CC-BY-SA unless otherwise noted.