View source
watch 02:52
Roblox: DeepWoken - The Loop
Do you like this video?
Play Sound
For other uses, see Stonehenge.
This article is about an in-game mission. For the in-universe event, see Operation Stone Crusher.

Destroy the jamming towers and Stonehenge itself.

Goodfellow: The UNF is planning for a bombing run in Iyuli. However, we can't go near the area because it's within railgun firing range. Thus, we'll be staging an attack in Area T8F, central Turkey, at the Stonehenge Type 3 disaster memorial. If you're struck by the railgun's fire or the shockwaves it generates, you'll be killed instantly. Also, our enemy has an electronic countermeasure system installed in the area around Stonehenge. It's jamming our radar FCS and making it impossible to lock on from airborne craft. As such, we'll try to have an allied ground force approach Stonehenge and use artillery to destroy the ECM base. Eliminate any hostile defense forces that may halt their advance. Once the ECM sites is destroyed, you'll be able to lock on again. That's when you'll attack and destroy the railgun itself. This is gonna be a test for all of you. You'll be accompanied by a team of crack pilots from the UNF and elsewhere. Don't let them get ahead of you. Any of you guys destroy the railgun, you're gonna get a hefty bonus.

Reaper only managed to enter radar jamming network and destroy three jamming towers, so the aerial squadrons and UNF ground forces can destroy the railguns but Reaper managed to destroy all the railguns which he succeeded.

Earning an S Rank on this mission required earning at least 19,000pts within about 7 minutes.

4AGM or UGBs are a good choice for taking out multiple enemies early on. Once all targets are destroyed, get ready to gun the ECM towers soon as they become targets. After doing so, taking out all the railgun turrets, bar one, and then take out the AA batteries and Sams and the four Su-27's that appear, as quickly as you can. If done in under 8 minutes, you should get the S rank.

Project Aces uploaded a video of the last part of the mission on October 3, 2013.[1] 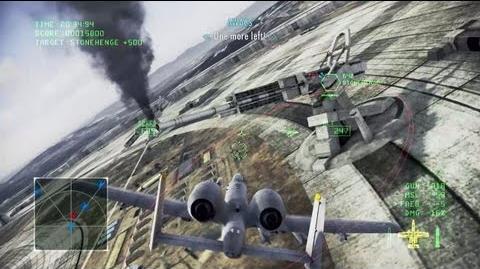 Goodfellow: I wish we had time to celebrate more, but that's gonna have to wait. While we were busy, attacking Stonehenge, the terrorists have been staging simultaneous attacks on multiple cities in Eastern Europe, the Middle East, and the Asian Federation. They took control in the blink of an eye.