"A reaper's emblem! Those are the aces who attacked Gracemeria!"
― Marcus Lampert[1]

The squadron was known to have been deployed during both the Estovakian Civil War and the Emmeria-Estovakia War.[6]

Part of the 370th Aviation Regiment of the Estovakian Air Force's Central Forces Precinct, the Strigon Team was an elite air unit formed by the Eastern Faction during the Estovakian Civil War, along with the Vampire Team, with Victor Voychek as its leader. His formation included Ilya Pasternak as his second in command, along with Karlo Bogdanovic and Cvitko Dudic. Despite being created after its inception, the Vampire Team soon overshadowed Strigon in prominence, leading it to struggle with a small pilot roster.[7]

As the war progressed, the unit increased in size with Vampire transfers and exceptional rookies, as did its fame. The skill of the squadron's pilots was a major asset of the Eastern Faction.[8]

On January 15, 2013, under the command of General Lyes, the Lyes United Front launched a large offensive against the Eastern Faction. However, with Strigon and Vampire squadrons deployed alongside the P-1112 Aigaion[9] and prototype CFA-44 Nosferatus, they were beaten back.[10] On October 29, in a battle near the Emmerian border, Strigon Team aided in the battle that ended the civil war.[11] By early 2014, the new government had effectively consolidated power.[8]

"Engage the enemy at will following Nimbus impact. Finish them off."
― Victor Voychek[12]

While attacking Emmerian fighters in the midst of their retreat from the city, Voychek was shot down by Talisman of the Garuda Team, leaving him with a crippled leg that would put an end to his flight career, causing his wingman Darijo Kovac to temporarily assume the role of Strigon's leader. During the occupation of Gracemeria, Strigon worked with the Aigaion and South Sea Fleet to repel the Emmerian King & Balloon Operations aimed at recapturing the capital.[13]

When the Emmerian military launched their counterattack from Khesed Island, Bogdanovic and a wingman were deployed to assist in the defense of Bartolomeo Fortress at Mount Marcello,[14] but were killed by Garuda as the site was being overrun by ground troops. After the start of operations in western Anea, a similar outcome met Dudic and three other pilots in the siege of Silvat Town.[15]

In February 2016, Kovac and a detachment of other members stationed at the Aigaion over the Fuscum Sea were shot down while attempting to defend the Aerial Fleet from an Emmerian surprise attack.[16] Along with the detachment of Strigon Team, the P-1112 Aigaion and their creator, Lorenz Riedel were also shot down.[17] To compensate for the excessive number of fatalities in the unit and to maintain it as a source of Estovakian morale, Vampire Team was dissolved and its members would be placed into the Strigon Team.[18] During the battle of the Moloch Desert, Nino Ljubek, Franz Leko, and other pilots were killed by the Garuda Team.[19]

"Be joyful. Our generals who brought us out of despair have given us a place to die."
― A Strigon survivor during Emmeria's assault on the Chandelier[20]

During the events of Operation Free Gracemeria, Ilya Pasternak led a flight of several Strigon pilots in a futile effort to defend the city from the Emmerian onslaught. Flying a personalized[21] CFA-44 Nosferatu, Pasternak ordered his wingmen to escape from Gracemeria before committing a suicide attack on the Emmerian forces, giving them a chance to flee.[22] The remaining Strigon members fled to Estovakia, where they collaborated with Gustav Dvornik in his plan to attack Emmeria with the Chandelier railgun.[23] The survivors were briefly stationed at the Razgriz Straits on the Chandelier's internal airfield for the rest of the war.[20]

On April 1, 2016, the survivors took part in the Chandelier Defensive Operation when Garuda Team and several Emmerian Air Force squadrons attacked the Chandelier in an effort to destroy it. The Chandelier Defense Team was split into two separate squadrons, one led by Aleksei Cheshenko and the other by Yaroslav Deryagin.[4] Many of the remnant's members died or disappeared during the operation, except for Toscha Mijasik, who surrendered to Emmeria.[24]

On June 30, 2020, replica Strigon Team aircraft, including a CFA-44 Nosferatu, were showcased on a runway at Redmill Air Force Base alongside the aircraft of Strider, Sol, Mobius, Yellow, Garuda, Avalanche and Galm squadrons at a ceremony commemorating the 25th anniversary of the end of the Belkan War hosted by the Osean Federation.[25] 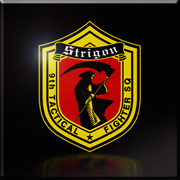 Strigon Team with the Aerial Fleet

Retrieved from "https://acecombat.fandom.com/wiki/Strigon_Team?oldid=267256"
Community content is available under CC-BY-SA unless otherwise noted.