The Su-24MP Fencer is a jammer variant of the Su-24M Fencer-D developed by Sukhoi.

Wernher and Noah Enterprises obtained this design and made it available to U.N and mercenary forces with their Advanced Automated Aviation Plant. During Operation Eternal Liberation, the USEA Federation also used this aircraft in jamming formations, accompanying Il-76s on operations to disrupt U.N forces.

"An Electronic warfare version of the Su-24, a large fighter bomber developed by the old Soviet Union. Can carry an ECM (electronic counter measures) pod that interferes with enemy missile guidance. Variable wins heighten variable speed capabilities, providing stable flight within every speed range. Its NATO codename is "Fencer-F". Fitted with thick armor, it is also tougher than comparable fighters of the same generation."
― Hangar

"A large scale fighter that is also noted for its use as an electronic warfare aircraft. It can be equipped with an ECM (electronic countermeasure) pod that can scramble the enemy's missile guidance. The variable wings provide increased shift stability and allow for stable flight at any speed level. Its NATO codename is "Fencer". It has enhanced endurance compared to other fighter planes because of its heavy armor."
― In-game description.

The Su-24MP is one of the new aircraft included in Ace Combat: Assault Horizon. It was first seen in the announcement trailer, where a single allied Fencer and Su-25 was briefly seen assisting a player-controlled A-10A in attacking an enemy Kirov-class cruiser, only to be shot down by one of its SAM launchers.

In the game itself, the Su-24MP appears in "Hostile Fleet" as allies flown by the Russian Molot Squadron and Varona Squadron, who assist the Warwolf Squadron atttacking the enemy fleet, and in "Hurricane" as hostile trying to stop the player from getting to Akula and Illich.

Side view with extended wings.

A Fencer taking off. 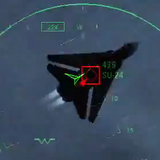 Hangar view of Color 3
Add a photo to this gallery

Retrieved from "https://acecombat.fandom.com/wiki/Su-24MP_Fencer?oldid=266113"
Community content is available under CC-BY-SA unless otherwise noted.