The Su-25TM Frogfoot is an attacker aircraft. It appears in Ace Combat: Assault Horizon and in Ace Combat Infinity.

The Su-25TM was used by New Russian Federation forces and were seen used in Derbent and in Moscow. Loyalist Su-25TMs were also used during Operation: Rescue Goose.

The Su-25TM was never used by the USEA Federation in combat. The plane, however, saw much use in the UNF, and was a popular choice for rookie pilots.

"Designed with a similar ideology to the A-10A, it is an all-weather attacker developed by the old Soviet Union. It has operational capabilities to handle large caliber 30mm machine guns, air-to-ground missiles and bombs. Its NATO codename is the "Frogfoot." While it is an aircraft from a past age, it remains one of the main attackers of the Russian air force even now, and by carrying radar it provides all-weather combat capabilities."
― Hangar 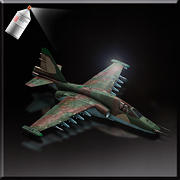 Description
An all-weather attack aircraft developed by the former Soviet Union using the same design concept as the A-10A. Heavily armored with titanium alloy and possessing top class endurance, it is also equipped with a large number of armaments. With the NATO codename "Frogfoot," it is an older generation aircraft, but is still a flagship attack aircraft in the Russian Air Force due to its all-weather strategic ability from its on-board radar.

Color 3 (right) in flight together with Color 1 (left)

Retrieved from "https://acecombat.fandom.com/wiki/Su-25TM_Frogfoot?oldid=266121"
Community content is available under CC-BY-SA unless otherwise noted.