View source
watch 02:30
Dead Cells Final DLC - The Loop
Do you like this video?
Play Sound

is a special version of the Su-33 Flanker-D featuring the character Miki Hoshii from THE iDOLM@STER. It was featured as a downloadable aircraft skin in Ace Combat 6: Fires of Liberation and Ace Combat: Assault Horizon, and was available as a standalone Special Aircraft in Ace Combat Infinity. 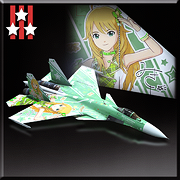 "A special version of the Su-33 featuring the same color scheme as Miki Hoshii from THE IDOLM@STER series.
You may say that its abilities are not being used efficiently, but in time you may be able to find untapped potential beneath its wings."
― Hangar

Nickname
Upgrading this aircraft to Level 20 unlocked the Nostalgia nickname for use at any time.

Two variants of the aircraft exist: the basic version and a low visibility, "monotone" version. Unlike in Fires of Liberation, neither version affects aircraft performance in any way.

"IDOLMASTER, Miki Hoshii Aircraft. An extremely stable, yet otherwise remarkably average aircraft with few outstanding qualities. While capable, it could be great if it only tried a little harder."
― Official description

"First to debut is Miki Hoshii. The world can't wait to see what talents this future star has hiding under her wings."
― Xbox Marketplace description

The Su-33 -THE IDOLMASTER MIKI- was the first aircraft of the iDOLM@STER aircraft series. It was released in November 22, 2007 with DLC PACK #02 at the cost of $4.99 (400 MSP, pre-MSP retirement). The Miki Hoshii aircraft is outfitted with a lime green and white coating, displaying Miki's likeness in the outer side of the left tailfin. A first in the series, the aircraft's projectiles now emit green colored smoke trails.

In performance, the aircraft receives a significant upgrade to its air-to-ground and stability parameters, thus enhancing its ground combat capabilities. In exchange for this upgrade, the aircraft's armor and speed are reduced. In terms of weapons capacity, the QAAM and RCL's total ammunition are given a large increase, while that of basic missiles and the XMA4 are reduced to mimic Miki's height and 3-sizes .