Pirate King of the Skies

is a modified version of the Su-33 Flanker-D with a special skin featuring pirate theme. It only appears in Ace Combat Infinity as a Special Aircraft. 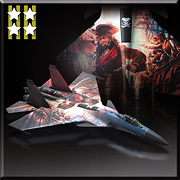 "A special version of the Su-33 featuring pirates with fearless smiles. The aircraft moves just like a nimble pirate moving across the deck of a ship as a result of improved acceleration and turning performance. Pirates are usually associated with the sea. However, for modern day air pirates, there is no aircraft more suitable than this one."
― Hangar

This aircraft was only available as a Ranking Tournament reward in late August 2014.

Nickname
Upgrading this aircraft to Level 20 unlocked the Pirate Admiral nickname for use at any time.

Retrieved from "https://acecombat.fandom.com/wiki/Su-33_-Pirates-?oldid=224548"
Community content is available under CC-BY-SA unless otherwise noted.