The Su-33 Flanker-D is a carrier-based variant of the Su-27 Flanker-B. It was introduced in Ace Combat 6: Fires of Liberation and later made appearances in Ace Combat: Assault Horizon and Ace Combat Infinity. It was most recently featured in Ace Combat 7: Skies Unknown. It is best known for its appearance as the official aircraft of Strigon Team.

During the Estovakian Civil War and Emmeria-Estovakia War, Su-33s were used by the elite Strigon Team as they allowed for takeoff and landing from the P-1112 Aigaion. Strigon partook in numerous operations, often turning the tide of battle in Estovakia's favour.[1][2] In 2016, Belkan ace Lorenz Riedel, callsign "Feniks", flew an Su-33 when the Emmerian Air Force launched a surprise attack on the Aerial Fleet. Riedel and all Strigon members present during the battle were shot down.[3] The surviving Strigon members later flew Su-33s when they defended the Chandelier from an Emmerian attack.[4]

Su-33s were fielded in the Lighthouse War. One member of the Osean Air Defense Force's Spare Squadron, Count, flew an Su-33 during multiple operations. The Erusean Air Force also made use of the Su-33, the most notable Erusean Su-33 pilot being Matthieu Bertin, callsign "Ibis", who was shot down by Trigger over the sea near Snider's Top during Operation Siren's Song. During the same operation the Erusean Navy deployed a squadron of their own Su-33s from the aircraft carrier Njörðr to counter the attack by Strider and Cyclops Squadron on the Erusean fleet.[5]

The New Russian Federation's fleets used the Su-33 as their main fighter during their uprising. They were first engaged in Power Play over Dubai and in Hostile Fleet over the Black Sea. They were all destroyed along with their aircraft carrier and fleet by the Warwolf Squadron, Molot Squadron and Varona Squadron

Su-33s were used by the USEA Federation during Operation Eternal Liberation. They were also available for use by UNF pilots.

"A large carrier-based fighter derived from the Su-27 that was designed for operation on aircraft carriers. Its canard arrangement makes it a top-class craft that is reliable and stable at low-to-mid speeds."
― Hangar

The Su-33 is available on the Aircraft Tree and it costs 290,000 MRP. It requires purchasing the MiG-29A Fulcrum.

"Using the Su-27 as a base, this carrier-based aircraft was developed for practical use by the Navy. Its speed capability is slightly lower than other fighter craft of the same generation, but it boasts excellent turning performance. Its NATO codename is "Flanker-D". The main and tail wings can be folded up to accommodate the storage space available on an aircraft carrier."
― Hangar

An Su-33 over Comona Base 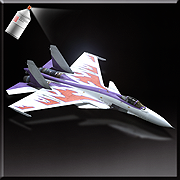 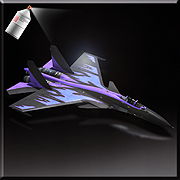 "TYPE: F (Fighter)
Using the Su-27 as a base, this carrier-based aircraft was developed for practical use by the Navy. Its speed capability is slightly lower than other fighter craft of the same generation, but it boasts excellent turning performance. Its NATO codename is "Flanker-D". The main and tail wings can be folded up to accommodate the storage space available on an aircraft carrier."
― Hangar

The Su-33 is available for the campaign prior to mission 11: Launch.

The Su-33 in an early build of Assault Horizon 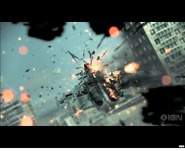 "Known by the codename "Flanker", the Su-33 is a carrier-based air superiority fighter. Its bold canard wings and aerodynamic fuselage design have realized performance never before achievable in a fighter. Its derivative shape stands as a symbol of modern aircraft design. Extremely maneuverable and quick to respond, the Su-33 is capable of maintaining an advantage even in battles against superior numbers. It is well equipped for aerial combat with high-maneuver and high-performance missiles. The aircraft's true potential depends solely on the pilot's skills, making this aircraft for experienced pilots only."
― Hangar

An Su-33 preparing to attack the Aerial Fleet

Lorenz Riedel over the Fuscum Sea

Retrieved from "https://acecombat.fandom.com/wiki/Su-33_Flanker-D?oldid=258614"
Community content is available under CC-BY-SA unless otherwise noted.