is a modified version of the Su-34 Fullback with a special skin featuring Alisa & Xiaoyu from Tekken. It only appears in Ace Combat Infinity as a Special Aircraft. 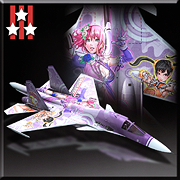 "A special version of the Su-34 featuring an illustration of two young female fighters, Alisa and Xiaoyu. The illustration has been created by Shunyo Yamashita. This aircraft was created in secrecy during the King of Iron Fist Tournament. Turning performance has been improved allowing it to destroy ground targets swiftly and evade anti-aircraft fire. It is equipped with special guided bombs (EGPB)."
― Hangar

The aircraft was only available as a Limited-Time Drop between October 20 and November 4 of 2014 during the Tekken Revolution Collaboration Event.

Nickname
Upgrading this aircraft to Level 20 unlocked the Battle Bonds nickname for use at any time.

Retrieved from "https://acecombat.fandom.com/wiki/Su-34_-Alisa_%26_Xiaoyu-?oldid=218024"
Community content is available under CC-BY-SA unless otherwise noted.