"All aircraft, be advised! Enemy strike fighters are on the approach! They're Fullbacks, definitely faster than the ones before!"
― AWACS Long Caster

The Su-34 Fullback (also known as the Su-32 Strike Flanker in older titles) is an attacker aircraft developed from the Su-27 Flanker-B. It made its debut in Ace Combat 5: The Unsung War.

The Strike Flanker saw use during the Belkan War where it was operated by the Belkan Air Force. It was later used by the terrorist organisation A World With No Boundaries. A notable unit was the Suerte Squadron.[1]

The Strike Flanker later saw use in the Circum-Pacific War. It was used as one of the attackers of the Yuktobanian Air Force.

In 2014, the Fullback was also deployed by Erusea against IUN forces.

The Su-34 was later utilized in the Lighthouse War by the Erusean Air Force. Two detachments of Su-34s were fielded by the EAF during Operation Sighthound in an attempt to attack the Osean Navy ships approaching Artiglio Port, only for all of the aircraft to be shot down by the LRSSG.[2]

The Su-34 Fullback was used by New Russian Federation forces. A number of them bombed Belyi Base until they were taken out by Warwolf Squadron.[3]

Wernher and Noah Enterprises obtained production rights for the aircraft and produced it in large numbers with its Advanced Automated Aviation Plant. During Operation Eternal Liberation, the aircraft was not used by the USEA Federation, but proved extremely popular among United Nations Forces mercenaries.

"A large bomber based on the Su-27. Heavily armed and armored, and capable of high speeds, it is well-equipped to defend itself in aerial combat."
― Hangar

The Su-34 is available on the Aircraft Tree and it costs 390,000 MRP. It requires purchasing either the Su-33 Flanker-D or the MiG-31B Foxhound.

"An attacker developed based on the Su-27 with a tandem seat cockpit. It exhibits top class maneuverability for an attacker, with its agile movements competing aggressively with fighters of the same class. Thicker armor also increases its survival rate. The NATO codename is the "Fullback". Assuming attack missions over an extended period of time, the rear section of pilot seats has a basin and a simple kitchen."
― Hangar 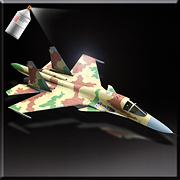 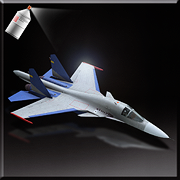 "This parallel two-seater attack aircraft is the successor to the Su-27. Boasting the best maneuvering performance among attackers, its agile performance is easily comparable to fighters of the same class. It has an increased survival rate because of its strong armor. Its NATO codename is "Fullback". Since it is intended for use in extended attack missions, the rear cockpit is equipped with a bathroom and a makeshift kitchen."
― Hangar

Available at the start of Hostile Fleet.

A Fullback and a MiG-29A Fulcrum

"A modified Su-27, called the "Strike Flanker." Specializing in long-range ground attack missions, this unique design includes a toilet and a simple kitchen behind the pilot's seat."
― Hangar

Complete campaign mission 12: The Stage of Apocalypse. It costs 115,000 credits to purchase.

The Flanker series. An Su-32 can be seen at the bottom left.

An Su-32 in Yuktobanian colors 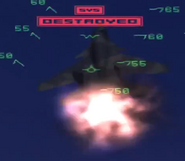 Retrieved from "https://acecombat.fandom.com/wiki/Su-34_Fullback?oldid=255347"
Community content is available under CC-BY-SA unless otherwise noted.