The Su-35S Flanker-E, also known as the Su-35 Flanker-E, is a fighter aircraft featuring improvements over the Su-27 Flanker-B. It made its first Ace Combat appearance in Ace Combat: Assault Horizon, replacing the Su-35 Super Flanker from previous games.

Su-35Ss were operated in the Lighthouse War by the Erusean Air Force, the Su-35S wasn't often seen until the later part of the war.[1] During Operation Werewolf, a flight of Su-35s, were deployed late in the battle to reinforce the failing defenses of the base, however they were all shot down by Trigger and the rest of Strider Squadron.[2] Later, during Operation Gorgon, Su-35S ace Lieutenant Colonel Emeric Pons, callsign "Axeman", was engaged by Trigger and shot down over Anchorhead.[3] Su-35s with a UCAV configuration were deployed during Operation Gorgon[3] and Operation Daredevil.[4]

The Su-35S was obtained and used by the New Russian Federation as one of its primary fighter. It was Andrei Markov's signature aircraft which featured a shark mouth nose design until William Bishop shot him down during air battle above Moscow.[5] During the invasion of Miami[6] and the attack of Washington, D.C.[7], NRF used it as its mainstay fighter. In the attack on Washington D.C. several Russian Su-35 pilots were instructed by Markov to conduct suicide attacks on various targets such as USS Anzio and Charlie Wen in order to make room for him to launch the last Trinity warhead on the White House. However, their suicidal deaths were in vain when Bishop destroyed the last Trinity warhead, allowing it to detonate safely on Tidal Basin and ending the NRF for good.

Wernher and Noah Enterprises reproduced the Su-35S with their Advanced Automated Aviation Plant and made it available for mercenaries to purchase around the world. During Operation Eternal Liberation, this fighter was preferred by a small number of United Nations Forces pilots.

The aircraft is displayed as Su-35S.

"A fighter designed to replace the old Su-27. It gets its excellent mobility from the latest avionics and thrust vectoring nozzles. Loaded with a rich armament, it is suited for combat at all ranges."
― Hangar

The Su-35S is available on the Aircraft Tree and it costs 850,000 MRP. It requires purchasing the Su-37 Terminator.

"The successor to the Su-27, a master aircraft that boasts menacing turning performance. A "Flanker" series aircraft possessing top class air battle fighting ability and equipped with an independent, two-dimensional thrust deflection nozzle. The NATO codename for it is "Flanker-E". A machine that can handle battles not only over short distances, but long distances as well."
― Hangar 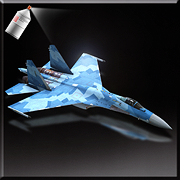 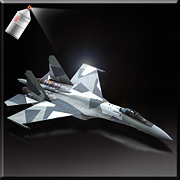 "The successor to the Su-27, a master aircaft that boasts menacing turning performance. A "Flanker" series aircraft possessing top class air battle fighting ability and equipped with an independent, two-dimensional thrust deflection nozzle. The NATO codename for it is "Flanker-E". A Machine that can handle battles not only over short distances, but long distances as well."
― Hangar

The Su-35 is available for the campaign prior to mission 11: Launch.

Retrieved from "https://acecombat.fandom.com/wiki/Su-35S_Flanker-E?oldid=260459"
Community content is available under CC-BY-SA unless otherwise noted.