is a modified version of the Su-35 Flanker-E with a special skin featuring the livery of Scarface 1 prominently featured in Ace Combat 2. It only appears in Ace Combat Infinity as a Special Aircraft. 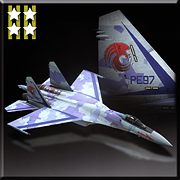 "A special version of the Su-35 featuring the design of Special Tactical Fighter Squadron "Scarface."
It features semi-active homing missiles that are rarely equipped on Flanker-type aircraft, resulting in an exceptional fighter capable of excellent performance.
There was a time in which regular forces had become dysfunctional and warlords took advantage of this by carrying out coup d'états in various regions. This aircraft was the key to stopping the coup d'états.
The right side of its nose features a "scar" design and the "Phoenix" emblem is present on the lead aircraft, "Scarface 1.""
― Hangar

The aircraft was available as a reward for the top 200 players in "Fighter's Honor" Online Co-Op Missions Ranking Tournament in mid-February 2015.
The aircraft was later made available in the Skilled Pilot Medal exchange program. Players can exchange 100 medals to acquire the aircraft.

Nickname
Upgrading this aircraft to Level 20 unlocked the Man Worth A Thousand nickname for use at any time.

Nose of the aircraft

Retrieved from "https://acecombat.fandom.com/wiki/Su-35_-Scarface1-?oldid=224939"
Community content is available under CC-BY-SA unless otherwise noted.