I don't care if it's a lie. Just tell them Mobius 1 is already here!

is a modified version of the Su-37 Terminator with a special skin featuring the livery of Jean-Louis, itself based on the livery of Yellow Squadron. It appears in Ace Combat Infinity as a standalone Special Aircraft. 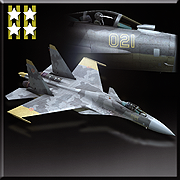 "A special version of the Su-37 which resembles the aircraft flown by a young trainee whose own country was defeated in battle. Even in the hands of less experienced pilots, this aircraft has great potential and mobility. Jean Louis was unable to show the hidden potential of his aircraft in battle, and as a result his squadron was destroyed despite their valiant efforts to retaliate."
― Hangar

The aircraft was only available for the top 3,000 players in the "I don't care if it's a lie. Just tell them Mobius 1 is already here!" Online Co-Op Missions Ranking Tournament in May 2015.

Nickname
Upgrading this aircraft to Level 20 unlocked the Following the Shadow of a Hero nickname for use at any time.

Retrieved from "https://acecombat.fandom.com/wiki/Su-37_-Jean_Louis-?oldid=224558"
Community content is available under CC-BY-SA unless otherwise noted.