is a modified version of the Su-37 Terminator with a special skin featuring the livery and aircraft number of Yellow 4. It appears in Ace Combat Infinity as a standalone Special Aircraft. 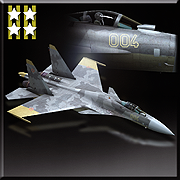 "A special version of the Su-37 based on the second aircraft from a powerful squadron primarily responsible for defending Stonehenge. All capabilities have been enhanced, including speed, allowing the aircraft to remain at the leader's side at all times. The original pilot was a trustworthy second in command, always in position to defend her leader. However, as the worsening conflict cut off supply routes, her fate was sealed when she had to fly in a poorly maintained aircraft."
― Hangar

The aircraft was only available for the top 200 players during the "[Back Again!] Yellow 13" Online Co-Op Missions Ranking Tournament in July 2015.

Nickname
Upgrading this aircraft to Level 20 unlocked the The Number 2 nickname for use at any time.

Retrieved from "https://acecombat.fandom.com/wiki/Su-37_-Yellow4-?oldid=224562"
Community content is available under CC-BY-SA unless otherwise noted.