The Su-37 Super Flanker was a combat aircraft from the universe of the Intercorporate War simulation.

Based on the Su-37 Terminator, the Super Flanker was the most advanced aircraft in the Universal Peace Enforcement Organization's arsenal. It was one of the first aircraft acquired by the group, being obtained along with other planes such as the MiG-33 Fulcrum SS and the EF-2000E Typhoon II to avoid accusations of a General Resource hardware monopoly.[1]

As with the original Su-37, it achieves superb maneuverability through aerodynamic features and three-dimensional thrust vectoring. It is a highly versatile machine in combat, being able to conduct air dominance and ground attack roles with ease thanks to its large fuselage. Over time, it underwent upgrades such as enhanced powerplants and canards, weight-reducing alloys and composite materials, the inclusion of arrestor hooks for carrier operations and an upgraded flight refueling system.[1]

"An all-mighty aircraft that can perform both anti-air and anti-ground duties. With excellent aerodynamic characteristics and high thrust engines with thrust vectoring nozzles, it achieves next-level maneuverability. Around the time of UPEO's creation, to avoid criticism of a General Resource weapon monopoly, the UPEO developed such planes such as the MiG-33, EF2000E, and Su-37 by developing and upgrading existing craft from other companies. It has excellent characteristics in all categories and is well balanced, making it easy to operate. "
― Ace Combat 3: Electrosphere - Namco Official Guide Book

"A single-seat twin-engine multi-role fighter. The Super Flanker's superagility [sic] is achieved through superior aerodynamic features and advanced turbofans with thrust-vectoring nozzles.... The Su-37 boasts the superior performance of all the planes in UPEO's arsenal; due to its large and spacious fuselage, the Su-37 can cope admirably with the whole spectrum of duties, from air dominance to ground attack. The UPEO has introduced numerous upgrades to ensure the fighter's viability: increased engine propulsion; new alloys and composites used to construct a stronger fuselage at a reduced weight; addition of an arrester hook for carrier landings; change of the in-flight refuelling [sic] system; differential canards. The avionics - in particular, the cockpit's coffin [sic] system - have been completely overhauled and replaced with newly-developed units. The result is a fighter with far superior performance over the original."
― Photosphere 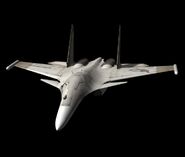 Retrieved from "https://acecombat.fandom.com/wiki/Su-37_Super_Flanker?oldid=252494"
Community content is available under CC-BY-SA unless otherwise noted.