I never thought you would be this good

is a modified version of the Su-47 Berkut featuring the livery of Ashley Bernitz and the Grabacr Squadron. It appears in Ace Combat Infinity as a Special Aircraft. 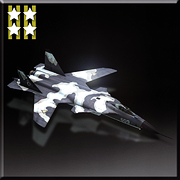 "A special version of the Su-47 featuring the design of a squadron that once caused tension and confusion between two superpowers. As a descendant of the world's most powerful and historical order, this squadron strives for supreme power and has the ability to complete missions with a high level of efficiency and survival rate. It's maximum speed and acceleration performance have been improved, allowing it to pursue it's enemy tenaciously. Originating from Nordic mythology, the term "Grabacr" means "grey back" in English and it refers to one of the serpents that chewed on one of the roots of the world tree, Yggdrasil."
― Hangar

The aircraft was only available as a reward in "I never thought you would be this good" Online Co-Op Missions Ranking Tournament in early May 2015.

Nickname
Upgrading this aircraft to Level 20 unlocked the Root of the World Tree nickname for use at any time.

Retrieved from "https://acecombat.fandom.com/wiki/Su-47_-Grabacr-?oldid=224568"
Community content is available under CC-BY-SA unless otherwise noted.