is a Special Aircraft variant of the Supermarine Spitfire Mk.IXe. 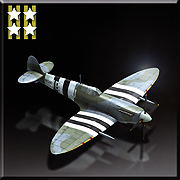 "A special version of the Spitfire based on the one flown by an ace pilot during the last great war.
Increased flight capabilities allow for tighter, sharper aerial maneuvers.
The tales of the superlative commander who fought and defeated powerful enemy aircraft one after the other, taking hardly a scratch himself, has become part of the history of the Royal Air Force."
― Hangar

was awarded to the top 3000 players in the "Piston Aircraft Team Deathmatch" Ranking Tournament.

Nickname
Upgrading this aircraft to Level 20 unlocked the Grey Cap nickname for use at any time.

Retrieved from "https://acecombat.fandom.com/wiki/Supermarine_Spitfire_Mk.IXe_-Flying_Aces-?oldid=224573"
Community content is available under CC-BY-SA unless otherwise noted.