Start a Wiki
watch 02:35
The Loop (Games)
Do you like this video?
pencil
We've still got some work for you, too, so don't slack off now.
This article or section is a stub. You can help by expanding it.

A surface-to-air missile, commonly referred to as SAM, is a type of anti-aircraft weapon. One of the most basic weapons of a military force, it is a class of missile designed to seek and destroy enemy aircraft. 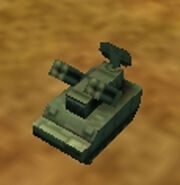 An S-300PS in firing position near the Red Square.

An SRN 9K33 Osa
Add a photo to this gallery
Retrieved from "https://acecombat.fandom.com/wiki/Surface-to-Air_Missile?oldid=249808"
Community content is available under CC-BY-SA unless otherwise noted.