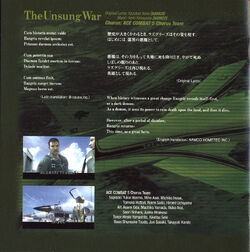 The Unsung War is the 13th track on Disc 3 in the Ace Combat 5: The Unsung War Original Soundtrack. It is a classical orchestral and choral piece featuring the Razgriz legend in both its lyrics and composition. The music was written by Keiki Kobayashi, one of the main composers in the soundtrack. The lyrics were arranged by Kazutoki Kono in Japanese, and then translated to Latin by B-cause,Inc. The song's lyrics were performed by the ACE COMBAT 5 Chorus Team.

The track plays during the Strategic Orbital Linear Gun's final descent during The Unsung War.

When history witnesses a great change Razgriz reveals itself-first,
as a dark demon.
As a demon, it uses its power to rain death upon the land, and then it dies.

However, after a period of slumber,
Razgriz returns-
This time, as a great hero.