watch 03:19
Wiki Targeted (Games)
Do you like this video?
Play Sound

The Tornado F3 is a long-range, twin-engine swing-wing fighter produced by Panavia.

Tornado F3's were sporadically deployed by the Yuktobanian Air Force during the Circum-Pacific War. Some of which were assigned to patrol around Glubina POW camp and were subsequently shot down by the Wardog Squadron in the ensuing POW rescue operation.[1] During Jilachi Desert Invasion, several Yuktobanian Tornado F3s were sent to intercept an Osean bomber formation approaching their HQ at Jilachi Desert.[2]

The Leasath Air Force was also known to use the aircraft during the Aurelian War, which also included an ace pilot with the callsign Gacrux.[3]

Complete Standoff in the Skies I. Costs 22,500 credits. 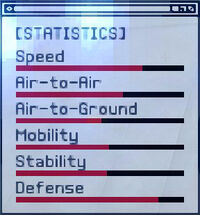 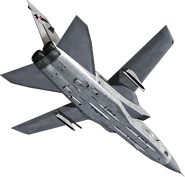 "A variant of Tornado GR.1 with a focus on air superiority. The fuselage is also extended to accomodate an intercept radar that tracks multiple target simultaneously."
― Hangar

A Tornado F3 in Yuktobanian colors

The aircraft is displayed as TND-F3.

Tornado F3 in the hangar

Retrieved from "https://acecombat.fandom.com/wiki/Tornado_F3?oldid=235000"
Community content is available under CC-BY-SA unless otherwise noted.