Start a Wiki
watch 02:45
The Loop (Games)
Do you like this video?
alert
SPOILER WARNING -- FULL ARTICLE
This entire article contains spoilers from Ace Combat 7: Skies Unknown. Proceed at your own discretion.

Trigger is a male Osean Air Defense Force pilot, a member of the LRSSG and former member of Mage Squadron. Following his alleged murder of former Osean President Vincent Harling, he was assigned to the OADF's penal unit, Spare Squadron. He later becomes a member of Strider Squadron in the LRSSG.

He is the player character in Ace Combat 7: Skies Unknown. His personal emblem is an orange-haired wolf clutching a revolver in its jaws.

Trigger was transferred to Mage Squadron as their number two after a recommendation to the IUN-PKF from the squadron leader Clown.[2]

On May 30, 2019, as a member of Mage Squadron, he aided in trying to secure air superiority over the Chopinburg Rainforest during Operation Dual Wielder. Osean aircraft were almost successful in obtaining air superiority, however, Erusea utilized an Arsenal Bird to regain control of the airspace quickly. Following this, both Mage and Golem squadrons were tasked with covering their allies' retreat.[3]

On June 6, 2019, after navigating through the Erusean's radar to attempt to save the former President of Osea, Vincent Harling and engaging with many UAVs sent from a nearby Arsenal Bird, Trigger allegedly killed the former president in the chaos. This incident resulted in him being reassigned to a penal unit (Spare Squadron). The severity of the alleged crime earned him three 'sin lines' as part of his aircraft marking.[4]

On July 4, 2019, now as a member of Spare Squadron, he participated in Operation One Pair. During the operation, Spare was tasked with crippling an Erusean base situated in Roca Roja before the main forces arrived. Through eliminating a large number of Erusean forces, Trigger proved to be quite a valuable asset to Osea. However, following the loss of a substantial amount of troops, the Erusean military reinforced the base with squadrons of MQ-99s.[5]

Eight days later, Trigger participated in Operation Two Pairs, assisting both Cyclops and Strider squadrons retreat from Yinshi Valley.[6] When members of Sol Squadron arrived to complicate things, Trigger was assigned to take Mihaly head on. After dogfighting him for a while and losing a few pilots to the advanced skills of Sol's pilots, Sol retreated for unknown reasons, with the remaining members of Spare able to escort Cyclops and Strider back to their base safely.

After a few more successful missions with Spare, involving even escorting the base commander D.McKinsey to friendly territory, Trigger was personally informed by McKinsey that the General Staff Office was reopening his case.[7]Shortly afterwards, he was transferred to the Long Range Strategic Strike Group. He became the leader of Strider Squadron, working with Cyclops Squadron to launch a counterattack on the Erusean military. Following his transfer, Trigger, at some point, had the three sin lines on his tail turned into three claw scratches. He quickly gains a reputation as "Three Strikes," often demoralizing enemy troops.

As leader of Strider Squadron, Trigger led during a raid on the Erusean Navy at Snider's Top and assisted in the defense of Stonehenge while Osean technicians repaired it to shoot down an Arsenal Bird. He would then play a critical role in destroying the Erusean nuclear capabilities by guiding bombers in destroying Erusean missile silos. Trigger would also lead Strider Squadron in assisting the capture of an Erusean air base at Cape Rainy.

Trigger and Strider Squadron's presence at the Battle for Farbanti would play a crucial role in securing Osean victory, with his presence demoralizing Erusean moral and Trigger themselves doing extreme damage to the city's defence. This would, however, change with the arrival of Sol Squadron, who in the resulting dogfight shot down Cyclops' commanding officer Wiseman before the fight would end without a victor after Sol Squadron withdrew following the destruction of the satellite network.

Strider Squadron would then assist in the efforts of Operation Gorgon, which was to escort an Erusean general  - Édouard Labarthe - to Osean territory, although it ended in disaster by an apparent friendly fire incident. However, before the death of the Erusean general, he revealed Trigger was not wholly responsible for the death of ex-President Vincent Harling, but rather by an Erusean Drone faking an Osean IFF using Belkan technology. [8] 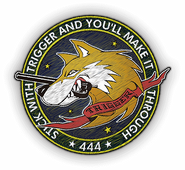 Trigger unleashes his Raptor's armanent against a Tu-95.

Retrieved from "https://acecombat.fandom.com/wiki/Trigger?oldid=247027"
Community content is available under CC-BY-SA unless otherwise noted.