Trinity is a next-generation thermobaric missile developed by the Russian Federation from the Horizon universe. It is the central "superweapon" of Ace Combat: Assault Horizon.

Originally conceived as an improvement on traditional cruise missiles, Trinity was in development by the Russian army for an unknown period of time by the second semester of 2015. In order to divert attention from the upcoming coup d'état, the crime organization Blatnoi used its influence to provide a small number of Trinity warheads to the SRN militia in East Africa, using civilian container ships to smuggle them into Africa.[1]

The existence of the weapon was discovered by NATO in December 21 during Task Force 108's first offensive operation against the SRN when a warhead was detonated in the center of a militia-controlled town, causing heavy damage to the two helicopter units involved in the mission.

A day later, the Shooter Squadron raided another rebel settlement to rescue VVS pilot Sergei Illich, who was shot down the day before. As Illich was secured by Delta Force units, a convoy of trucks carrying a Trinity warhead began escaping out of the town, but was intercepted by Doug Robinson causing their payload to detonate, vaporizing the bridge they were on.

An engagement with rebel forces led the Delta Force units to intercept a radio transmission in Russian, describing an area north of the settlement being used to store the Trinities owned by the SRN. The next day, Delta Force launched a ground assault on the rebels' underground storages in Mogadiyu, and destroyed their Trinity stockpiles.

Opening of the war

Hours after the Mogadiyu mission, the New Russian Federation began their uprising and revealed themselves to the world by setting off a Trinity warhead in the city of Carruth, annihilating the entire town.

The impact was witnessed by William Bishop of Warwolf, who watched the explosion from the NATO air base in Hamada after an emergency landing following his encounter with Andrei Markov. Stunned by the landing, he was swept off his feet and knocked to the ground by the explosion's blast wave.

In order to divert global attention from the coup d'état, the NRF threatened to deploy Trinity ordnance on the city of Dubai in the United Arab Emirates if their demands were not met. Task Force 108 was moved from East Africa to Dubai, and participated in a massive operation spanning the United Arab Emirates region in December 26, which saw Nomad and Shooter raiding several container ships suspected of carrying Trinity materials in the Suez Canal, Warwolf and the United Arab Emirates Air Force fighting to stop a Russian Air Force attack on Dubai itself.

In the aftermath of the battle in Asia, the New Russian Federation rose in arms across Russia, taking down the government and assuming control of the nation with the aid of several renegade units. In order to assert their hegemony over the nation, they used a single Trinity missile to destroy an air base northeast of Moscow.

A second Trinity missile was used against NATO and pro-government forces in the aftermath of the naval invasion of Derbent in December 31. Mounted on Andrei Markov's personal Su-35 Flanker-E, he arrived to the area and fired it at the rebel-controlled fortress reclaimed by the loyalists. However, the attack was foiled when Bishop pursued the missile and shot it off course before hitting the citadel, causing it to tumble out of control and explode in the air.

End of the NRF insurrection

By the time the loyalist forces defeated most of the rebel forces, only three Trinity missiles remained in the NRF's hands. The first of these missiles was used in January 15, 2016 during the siege of Moscow, after the loyalists and TF108 units approached the Kremlin, rendered defenseless by Doug Robinson's intervention.

The missile hit and destroyed most of Moscow's suburban area, destroying much of the loyalist Russian forces. Minutes after the explosion, a force of Tu-160 Blackjack bombers entered the area to attack Moscow, knowing that the city had fallen to the allies.

Having returned to Moscow after refueling, the Warwolf Squadron raced to intercept the bombers and the P-270 Moskit cruise missiles they launched at the city, stopping them before penetrating the local no-flight zone. However, a sixth Blackjack carrying a second Trinity missile soon entered the region to attack Moscow, protected by Andrei Markov himself. Enduring his offensive, Bishop barely shot down the Tu-160 as it flew towards central Moscow as it was preparing to release its payload. However, the weapon failed to explode when the bomber smashed into the earth.

After Markov was shot down by Bishop over Moscow, he made his way to the Kremlin and confronted Ivan Stagleishov in his office, murdering him and securing the last remaining Trinity for himself. He mounted the missile in his customized PAK-FA and set off some time after the battle in Moscow with a large group of Blatnoi-aligned Russian Air Force pilots to attack the United States, along with his former wingman Illich.

In January 18, the Russians arrived to the eastern US coastline in Miami, Florida, and were intercepted by United States Air Force aircraft, including the Warwolf Squadron. They launched attacks against core areas of the city, but were eventually driven back and defeated by the USAF forces. Towards the end of the siege, Markov entered the battlefield and tried to kill Bishop with a missile, but was saved by José Gutierrez. After helping Guts eject from his F-22A, he confronted Akula in a head-on clash, damaging Trinity's tail area with gunfire. Markov then retreated north to regroup with another group of Russians to carry out an attack on Washington, D.C.

After Illich and his wingmen were killed by Bishop off the coast of Hollywood, Andrei flew to Washington, D.C. to lead the assault on the city. Warwolf later arrived to the city during the siege, and assisted the local defenders in their fight with the Russians, many of which had such zeal to the New Russian Federation's cause that they willingly killed themselves in kamikaze attacks.

The invading force was later destroyed, though at a great cost for the Americans. Shortly after the initial attack ended, several Blackjacks entered Washington to bombard the White House, but were stopped by William Bishop and the USAF. After the sixth bomber smashed into the Woodrow Wilson Bridge, Markov entered the city to use Trinity. A lengthy and violent battle was fought by Bishop and Akula over the skies of D.C., as the Russian's attack attempt was repeatedly foiled by Warwolf 1.

As his plane started taking damage, Andrei abandoned his assault on Bishop and started an attack run to launch the Trinity missile on the White House, releasing it moments before dying at the hands of Bishop. Bishop noticed the weapon in mid-air and barely managed to send it off course towards the Tidal Basin, where it detonated, ending the weapon for good and leaving Markov and the rest of the NRF pilots' deaths in complete vain.

Built as an improvement on existing cruise missile design, Trinity is an aircraft-launched cruise missile. Visually, it appears as a heavily modified 3M54 Klub (SS-N-27 Sizzler) frame, borrowing features from various variants, such as the engine nozzle and wings of the 3M54E. The missile is protected by an armored outer body painted bright orange, with a checkerbard pattern, likely for flight behavior inspection, near the nozzle, most likely for the reason that Trinity is still an experimental weapon,

Trinity is armed with an special thermobaric warhead with extreme destructive power, completely vaporizing anything in an impact zone and generating a massive crater. Owing to its fuel-air nature, an impact generates a massive shockwave capable of pushing aircraft and even main battle tanks, making it hazardous for low-flying aircraft. In addition, the blast will severely burn persons caught within the explosion. Although the  effect is lessened, stand-alone warheads can cause great damage.

As a player weapon

After the campaign is played through once fully, the PAK-FA can be selected in multiplayer and free mission, and the Trinity missile will be equippable. The aircraft has four EW1 missiles on Rookie difficulty, and it reloads at half the speed of a normal missile, making it one of the fastest-reloading special weapons of its nature. 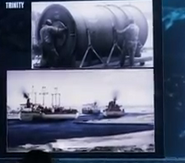 Retrieved from "https://acecombat.fandom.com/wiki/Trinity?oldid=260457"
Community content is available under CC-BY-SA unless otherwise noted.