is a Special Aircraft variant of the Typhoon featuring the livery of Mobius 5 of Mobius Squadron. It was available in Ace Combat Infinity as a Ranking Tournament reward. 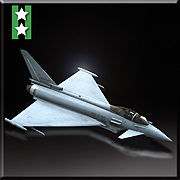 "An Typhoon special aircraft based on the fifth aircraft from the 118th Tactical Fighter Wing "Mobius Squadron".
It has been enhanced with a focus on speed and weapons capacity in order to travel quickly across a wide battlefield and has flown alongside the first aircraft in many battles.
The pilot of the original aircraft appears on paper to have been skilled in air-to-surface missions, completing missions alongside the first aircraft that were said to require nothing less than a miracle to pull off. However, during their final mission the pilot's overall potential was demonstrated when the pilot fought competently against an enemy Su-27.[note 1]"
― Hangar

Nickname
Upgrading this aircraft to Level 20 unlocked the Air to Land Specialist nickname for use at any time.

Retrieved from "https://acecombat.fandom.com/wiki/Typhoon_-Mobius5-?oldid=257040"
Community content is available under CC-BY-SA unless otherwise noted.