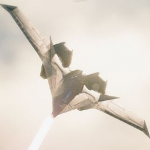 Actually just Calamitous, but the name was taken :P

My favorite AC game is Ace Combat X: Skies of Deception for the PSP, for the curious.

Avid skin modder for AC7. My works can be found here[1].

I'm also the creator of the True Canon Pack, a massive AC7 skin modpack that adds details to the NPCs of AC7 and who's goal is to remaster EVERY NPC skin with player and NPC replacement versions. Will be released in waves, and will include:

A full list of skins can be found here.[2]

Retrieved from "https://acecombat.fandom.com/wiki/User:CalamitousEnigma?oldid=260335"
Community content is available under CC-BY-SA unless otherwise noted.