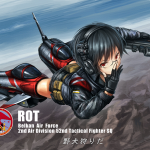 Hello! I`m Japex032! Where should i start.... My passion for Ace Combat started, when i got my PS2 and Ace Combat 04 as a birthday gift at the age of 3. (Yes, that is correct) I fell in love with the game and dedicated my life to 04,5 and Zero. I´ve also played Ace Combat 6 & Assault Horizon. I´m also a big fan of Metal Gear, Need For Speed and other racing sims.

Jasper was born just before the Belkan War ended in Birenheim. Through his whole childhood he admired the Belkan aces whose photos were on his Father's image albums when he was serving in the Air Force as a mechanic. Jasper was flying with his father's bi-plane across Belka at the time he graduated from Dinsmark Junior High.

Jasper enlisted to the heavily down-sized Air force in 10th of June, 2015 and was happily accepted because of his father's status. he was assigned to the 10th Air Division. He certainly didn't need his father's status to make a name for himself in the 10th Air Division. He gained the nickname "The Swift", because his flying style mimicked the swift, which is known to be extremely nimble. He was so nimble, even the instructors had trouble keeping up. Because of this, he was assigned to the prestigious 3rd Tactical Fighter Squadron, The Lynx Team.

His career skyrocketed when he got a position from the Lynx Team. He made his skills known to the public when at a training exercise for teams with considerable skill, he "took down" 8 other planes himself and survived with his team mates. By his 22nd birthday he was already a Captain and was Lynx 2,the Leader's second-in-command.

in May 2019 he recieved an offer from the OADF which he gladly accepted. He would be given his own squadron and he would be free to choose his and his team's equipment. He handpicked the 7 other pilots to his squadron. He named the squadron as The Swallows and chose the Su-37 Terminator as his plane.

Sometime in 2020 The Swallows were mobilized with the whole OADF when the Osea-Erusea Conflict started. The Swallows survived the war and were branded as heroes due to their achievements in the war. They were disbanded soon after.

About my real self

Ace Combat has made me very interested in flying in real life. I flew my PPL(Private Pilot´s Licence) last year ( as of 2016) and soon i am going to apply to the Air Force Academy in Tikkakoski, Finland.( After high school, of course.)

Anime is also one my main interests. Been watching it since i was 12. My Library has titles such as Dragon Ball Z, Super etc., Initial D, Area 88, Attack on Titan etc. The Library is quite large for a high school student, because it has over 650 entries. I of course read Manga when i find a suitable time. :D

I don´t want to brag too much, but my family has a very long history associated with aviation and flying in general. My Granddad served in the Finnish Air Force in the 1950´s till 1988, when he retired from duty,

Retrieved from "https://acecombat.fandom.com/wiki/User:Japex032?oldid=210954"
Community content is available under CC-BY-SA unless otherwise noted.