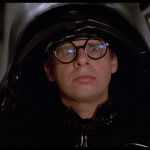 Hi there! Before you read this stuff below, know one thing: EVERYTHING THAT WILL BE WRITTEN BELOW IS PURELY MY OWN CANON, AND HAVE NO HISTORICAL/CANONICAL RELATION TO ANY OTHER GAME FROM ANY OTHER COMPANY, AND WILL USE REFERENCES FROM OTHER GAMES AS WELL, (and some furry stuff, too) THUS ALL THE STUFF WHO BELONGS TO SOMEONE/SOME COMPANY IS THEIR COPYRIGHT, I DO NOT OWN ANYTHING (aside from my mind, hehe XD)

Raimundos (mostly known as "Rimundos", "Dedo Frouxo" or " 'Mad' Max Payne" back in the Mojave and CapitalWastelands) is an ark dweller, whom ultimately found his profession as a "young" Su-37 pilot (he's 21, but he was created 300+ years ago, before being put into cryostasis), "original" from a Pre-War mega-float named "The Ark", that barely escaped the Hellfire of Dec. 31st 2099. He have survived Hell and Highwater back in the post-nuclear-apocalyptic world and, thanks to his research in dimensional doors, was able to escape the chaos and torment of the Wasteland (mostly from the NCR Terrorist Hunters and Legion Assassins - he wasn't much liked over the Wasteland, either).

He have seen action in many countries in his 7 years of service for National Airforce Military Counter Offensive, or maybe Now All your Money beCome Ours, before turning to serve as a fighter pilot for the League of Canadian Superheroes; he lost some cash, flied over famous places such as Avalon Dam Fortress, Sand Island Airbase, The Siege of Farbanti, Gnome Ravine, somewhere on the Outer Space, somewhere in the Outback, somewhere in Africa (there's stories about him meeting first-time the Sharkmouth 'round the area) and even fought alongside UPEO against General Resources and Neucom (although many details are shrouded in darkness, as he had the US version of AC3). Also he lost some more ton of cash.

It is rumored that this young pilot flew with his Flanker alongside famous pilots, such as the legendary Mobuis 1, the dubious Ghosts of Razgriz (although there's records he DID flew alongside the Wardog squadron), and even

with the nearly-mythical Demon of the Round Table. Some stories claims that he was called by Namco to fight for the freedom of Gracemeria, but because of lack of resources (mostly because he doesn't have an Xbox 360), he was unable to help them. It's also rumored that he served with the Scarface squadron, but he strongly denies any involvement with them.

Raimundos is a quiet, not-so-ladies' man guy who "prefers to sit alone in a corner". Most of the time he's quiet, but when someone begins a discussion and calls him forth, he puts "the whole world outta his mouth". Usually, he can be found in his hangar tuning up his planes, or researching some sort of space-travel stuff, or building an different-styled plasma gun, as plasma rifles from his world are "way leagues retro-futuristic for his tastes... but that is what Fallout is all about, right?". That, if he's not being bothered by Heather, by Minerva's childs, or by Staff Sergeant Joseph "Red" Hartsock, giving him an (another) redeployment order to elsewhere, probably where St. John lost his bollocks.

Despite his friendly mannerism, he also do keep a dark, bloody secret with him: he is the responsible for the genocide of 10 billion people before the Great War of 2099, as well as his sole existence being the main reason to that war to begin. He also counts with the help of Germany, Great Britain, Poland, Russia, Japan, Italy, Brazil, United States, Canada and many other countryballs that exists. Oh, did i mentioned he loves Metal, and he does have brothers?

PS: everything is subject to any alterances as well, as soon as i learn how to do stuff in a wikia, that is (dunno how did i ended up here, though, neither the f#ck i'm typing upstairs)

In case i'm flying too high, just tell me how this bullsh%t is going, if someone ever watches this...

Retrieved from "https://acecombat.fandom.com/wiki/User:Raimundos?oldid=168280"
Community content is available under CC-BY-SA unless otherwise noted.