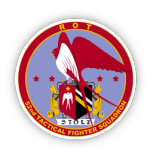 Moin, welcome to my user page. I'm RazgrizStrigonRot. I worked on various wikis before, especially on the German Jedipedia, the 2nd biggest Star Wars wiki worldwide, so I use my experience to improve this wiki, my main goals being the cleanup of poorly written (older) articles and keeping up the "On This Day" template.

In real life, I'm a soldier of the Bundeswehr, stationed at an Army Aviation Regiment (Heeresflieger), holding the rank of Hauptgefreiter (Private First Class).

It all started with Air Combat on PS1, which I had occasionally played when I was younger. Also had Ace Combat 2 and Ace Combat 3: Electrosphere, the CD of the former became broken after some time. Over the years the series got forgotten & on PS3 I played the two Tom Clancy's H.A.W.X. titles. In the Army Aviation unit I'm working on our regiment's helicopters Bell UH-1D & NH90, but I also got interest in the Luftwaffe's Typhoon and in return came somehow back to the series, having ordered the PS2 trilogy (also played them) & playing Ace Combat: Assault Horizon & Ace Combat Infinity, also getting to know the world of Strangereal through the games & this wiki, having the most interest into Demons of Razgriz, Stovie Aces & me as Rot 5.

Retrieved from "https://acecombat.fandom.com/wiki/User:RazgrizStrigonRot?oldid=165413"
Community content is available under CC-BY-SA unless otherwise noted.