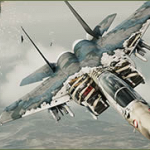 aka Der Fuhrer of Fighters

January 1st, 2045 (On this date, Erik had an identical AI copy of himself activated then transfered to a cloned body. The new "Arrik Felsen" looks exactly as Erik did at the start of the Belkan War and has all of his predecessor's skill, personality traits and memories, so in a way, it could be said that he never died).

Air Combat Maneuvers/Problems with my Mechanic's Solutions for them

Stalled Rocket: When in a vertical climb with an enemy on your 6 o'clock, use your brakes to stall and fall away slightly, then just as the adversary passes ahead, fire the afterburner at full power and you should be in perfect position for a missile shot or gun kill.

Fatal Pursuit: USE ONLY AS A LAST RESORT. When an enemy is diving on you from 6 o'clock high, pull up, barrel roll then dive straight down while at full afterburner, in a slight turn. If he doesn't follow, pull back up and escape. If he does, then use the terrain to your advantage by continuing your dive, then at no higher than 750 feet, pull up sharply to avoid a crash. This often distracts an opponent, compounding the difficulty of following your maneuver and, if done properly, will cause your opponent to plough nose-first into the ground, ending the fight without firing a shot.

Zero: Named such as there is no room for error with this maneuver and should only be attempted if one has taken no damage and has no other choice. One pulls up high above an opponent's aircraft, then dive on them at full speed with one wing pointed right at them. If done properly, your wing will slam into them like a cleaver and take them down, leaving you with 99% damage to your plane.

P: Friction locks cause throttle levers to stick. S: That's what they're there for!

P: The T/C ball seemed stuck in the middle during my last turn. S: Congratulations! You've just made your first coordinated turn.

P: First class cabin floor has a squeak S: Co-pilot told not to play with toddler toys in cabin anymore

The Wywyrm's Nest is an air combat tactic that I developed myself. Inspired by Gualt Team's "Golden Nest", its basicly consists of a triple-level Lufberry Circle, the first with two aircraft, the second with four rotating in the opposite direction, and the third being a repeat of the first only below the second. They are referred to as levels A, B and C respectively. At any one time, two aircraft, one from Level A and the second from Level C, may drop out of their circles and launch a simultaneous attack. The one from Level A then forms up at Level C and vice versa for the other. Aircraft in Level B remain in their positions to provide support and keep the opponent trapped (See Figure 1).

If the 6th Jagdgeschwader was in an AC Game, Our themes would change base on preference. The final battle theme music would be the following (Zero: ACZ)

Retrieved from "https://acecombat.fandom.com/wiki/User:Wywyrm_1?oldid=114146"
Community content is available under CC-BY-SA unless otherwise noted.