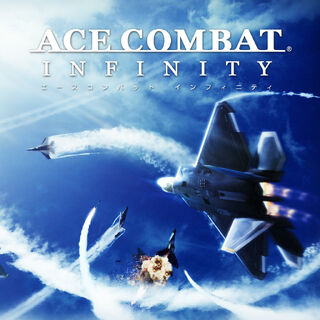 The moment we've been waiting for since last June is finally upon us. Ace Combat Infinity has released! For now, it is restricted to Japan and certain Asian countries. However, North America will get the game on May 27 and Europe on May 28. All regions should have the game by the end of May!

Electrosphere.info and Acepedia collaborated on a spoiler-free guide for new players of Ace Combat Infinity! We hope it will serve you well in your adventures as you become a legendary ace pilot! Click here to check out the Infinity Ace Seminar!

The story campaign comes with five missions for now (more missions will be patched in, at least three more). Unlike what we were told before, fuel is required to play the campaign, even the first time. Additionally, there is a credit requirement on missions 3 and above. For example, Mission 3 requires 200,000 credits to unlock. It also requires a certain number of credits to repeat the mission every time you repeat it. Further missions get higher requirements. There is a 2000 yen (estimated USD$20) upgrade that will allow you to play the campaign without using fuel and without having to spend any credits up until Mission 8 called the Unlimited Campaign Play Ticket. It is up to you if you want to obtain the credits or spend the money, but trust me, the grind is difficult until you unlock future aircraft.

I will say this: The story is brilliant. It's amazing. It's incredible. I love it. Play it. You'll love it.

The Aircraft Tree is a lot more coherent now! Also, you'll get bonuses for playing within the first 10 days of starting your first online mission, depending on how many days it's been (I suppose the longer, the better, yet it must remain before 10 days to receive some of these special bonuses). You also get 10 free fuel in the Announcements section of the Main Menu, and...

Trust me when I say that you'll want to play these, especially the Special limited-time ones. From the Morgan to limited-time emblems, these challenges will definitely make your experience a lot more thrilling.

...is now going to be a hub of information for the game. This means spoilers. If you don't want spoilers, I suggest you leave the site until you play or watch the story yourself. I'm serious - I've done it many times before.

Also, on the main page and the Infinity article, we're going to have a special header at the top. This header will display specific information such as new limited-time challenges, new DLC, new trailers, etc. Look for this header if you want to know the latest information on the game!

Retrieved from "https://acecombat.fandom.com/wiki/User_blog:SlyCooperFan1/Ace_Combat_Infinity_Release?oldid=107187"
Community content is available under CC-BY-SA unless otherwise noted.