The Weapon UAV is a minor UCAV designed to support the ADF-11F Raven. It debuted in the main campaign of Ace Combat 7: Skies Unknown as one of the Ravens' weapons used during the final mission, "Dark Blue".

In April 2019, Project Aces teased on Twitter that players would get to use Weapon UAVs as a special weapon in an upcoming DLC.[1] A few days later, the weapon would be revealed as belonging to a playable ADF-11F Raven.[2]

The Weapon UAV's single-engine, small-wing design bears striking similarity to the X-45. Where the Weapon UAV differs is in armament: it carries a single Tactical Laser System that can penetrate armor,[3] as well as an internal, high-rate-of-fire Pulse Laser unit.[1]

Two Weapon UAVs can be equipped to a single ADF-11F, one on each wing. When a ADF-11F UAV is under attack, it may deploy them to support itself. The Weapon UAVs can protect the main craft—by neutralizing enemy fire with the laser system—or directly attack enemy units. As with most small drones, Weapon UAVs are very fragile. In addition, Weapon UAVs require a functioning ADF-11F; if the ADF-11F is destroyed, its Weapon UAVs cease to function.[4]

However, when used by a human-controlled Raven, the Weapon UAVs instead are launched via a lock on, similarly to a missile.[1] When deployed, these Weapon UAVs will fly towards their target, constantly strafing them with Pulse Laser rounds for a certain amount of time. This also allows the Raven pilot to focus on another enemy while the Weapon UAVs attack the first targeted enemy. After a specific amount of time, they will return to the Raven craft that deployed them and re-mount onto its wings. They can target both air and ground units, but care must be taken with the latter, as the Weapon UAVs are capable of smashing into the ground or obstacles should a pilot's deployment be sloppy.

In development, the ADF-11F Raven was initially slated to use MQ-99s on the wings. These were later replaced by the Weapon UAVs.[3]

Weapon UAVs made a minor appearance in the Lighthouse War during Operation Hush. The two existing ADF-11F models, codenamed Hugin and Munin, deployed each of their Weapon UAVs after sustaining a certain amount of damage from Trigger. Once Trigger destroyed both Ravens, any remaining Weapon UAVs self-destructed.[4]

"Small UAVs loaded beneath both wing units of the main aircraft. They will attack a locked-on target when launched, leaving you free to attack a different enemy if desired."
― Hangar 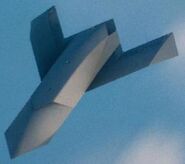 Retrieved from "https://acecombat.fandom.com/wiki/Weapon_UAV?oldid=257904"
Community content is available under CC-BY-SA unless otherwise noted.