"I had to get through the worst, to prove I was the best."
― William Bishop

Lieutenant Colonel William Bishop (ウィリアム·ビショップ) is the leader of the United States Air Force Warwolf Squadron. He is a flight veteran with many years of experience in various conflicts.

William Bishop was born in California in the United States.[1][2] Nothing else is known about his early years.

As a fighter pilot in the United States Air Force, Bishop saw his first combat in the Bosnian War as a rookie under callsign Wolf 4 in Wolf Squadron. He later served as a squadron commander in unspecified conflicts in Iraq and Libya.[4]

By the 2010s, Bishop had earned the Lieutenant Colonel rank. He was assigned to be a test pilot for Righteous, a modified F-22A Raptor in development to be a UAV.[4]

While testing Righteous, Bishop was offered the role of squadron commander in Task Force 108, which was fighting the SRN insurgency in West Africa. Frustrated with the lack of combat in being a test pilot, Bishop accepted. [4]

One night soon after arriving in the conflict zone, Bishop suffered a nightmare where he and Warwolf Squadron were defending Miami from an attack led by a fighter pilot with a shark on the aircraft's nose. Bishop was shot down in the nightmare, and when the shark-nosed aircraft attempted to hit him head-on, he abruptly woke up in a sweat before he is being told by Guts that they need to scramble. Upon awakening, he witnessed several Nomad helicopter squadrons going on a mission, with D-Ray aiding them. [6]

Walking through the base, Guts then confronted him on his nightmare before having found out that D-Ray took a hit on their recent mission. Encountering a few people who playfully conversed with them, such as Janice Rehl and Sergei Illich, Bishop and Guts walked through the base to get a sitrep from La Pointe. Bishop was then ordered by La Pointe that with enemy aircraft being all over the target area, he will need to gather everything that the task force has with Trinity having been found by helicopter forces a while ago. La Pointe later ordered Bishop to give the information to the intelligence officer before he went on for his mission.

Shortly thereafter, Bishop and the rest of the Warwolf Squadron, along with the Red Moon and Lion Squadrons were scrambled to defend Hamada from an air attack. Whilst taxiing, a KC-10 Extender nearly ran over them after it was shot down by enemy aircraft. All remaining squadrons, including Bishop, took off quickly, were they engaged several SRN MiG-21bis Fishbed aircraft attacking the base, with Bishop luring a few of them to the base where they are shot down by allied ground units. However, the base's communications were knocked offline and Warwolf continued defending the base from further damage. Later, Bishop and the rest of the squadron engaged more SRN forces attacking a nearby oil facility. In the ensuing firefight whilst pursuing retreating fighters, Red Moon 1's aircraft was heavily damaged and soon ejected. Bishop then destroyed the retreating fighters to clear the way for Nomad Squadron to rescue Illich but was captured before he can be rescued. Nevertheless, the mission is still a success and NATO later authorized a mission to rescue Illich.

After Illich was successfully rescued, Bishop and the rest of Warwolf Squadron were later deployed to assist Spooky 01 and a Delta team in raiding an SRN hideout in Mogadiyu. As the mission began, Warwolf began clearing SAM sites, allowing Spooky 01 and the Nomad Squadron to begin their assault. Bishop and the rest of Warwolf squadron later broke off to engage SRN fighters that were chasing a civilian aircraft. Following the mission, Bishop and the squadron attempted to land back to base, only to find out that the city of Carruth was under attack by rebel forces just as Stagleishov and [Big Bear Squadron]] abruptly took off. While Big Bear headed up east, the Warwolf and Lion squadrons engaged several MiG-21 aircraft. However, as Stagleishov and the rest of Big Bear Squadron returned, they began to open fire on the NATO aircraft. Bishop then informed the rest of Warwolf squadron and Lion squadron that all Russian aircraft are hostile and to be taken down. As they engaged the enemy, Stagleishov informed Bishop that his betrayal was his own deeds without any external intervention. In the midst of the firefight, Bishop saw the same shark-nosed Su-35 from his nightmare joining the fray as it began attacking Guts' aircraft. Bishop then engaged the Su-35 and saved Guts in the process, but not before the pilot began to damage Bishop's aircraft, causing it to suffer external damage. Before the pilot can finish him off, Stagleishov informs him to stand down as they are low on fuel, even mentioning the pilot's name, Markov. Markov then taunted Bishop that he isn't "good enough" too take him on before leaving. With the aircraft suffering from low oil pressure, Bishop began an emergency landing, being informed by La Pointe that his men were found dead at the tower and it was Big Bear being involved and not the ground force, while Illich has recovered and taken command of the loyalist pilots. Just as Bishop soon landed, the aircraft's landing gear began to malfunction and his plane began crashing on the runway. Weakened, Bishop emerged from the damaged aircraft, and witnessed Carruth being destroyed.

Bishop parachutes to safety after ejecting from his F-22A Raptor

Bishop in his aircraft, alongside Warwolf 2 in his Lightning II

Markov missing Bishop by a few feet. during the attack on Miami

Bishop in F-22A cockpit
Add a photo to this gallery 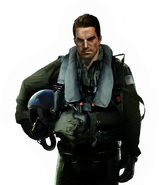 Retrieved from "https://acecombat.fandom.com/wiki/William_Bishop?oldid=260511"
Community content is available under CC-BY-SA unless otherwise noted.