is a modified version of the X-02 Wyvern. It only appears in Ace Combat Infinity as a Special Aircraft.

"A special version of the X-02 aircraft featuring the design of an aircraft flown by a pilot that lived with pride. Its variable wings provide unsurpassed combat mobility. There are stories of a pilot who chose to live by the "way of the knight." He used this aircraft to win countless wars."
― Hangar

The aircraft was only available as a reward in "Legendary Wyvern" Online Co-Op Missions Ranking Tournament in early March 2015. 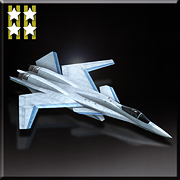 X-02 -Knight- as seen in the Hangar.
Add a photo to this gallery

Retrieved from "https://acecombat.fandom.com/wiki/X-02_-Knight-?oldid=147746"
Community content is available under CC-BY-SA unless otherwise noted.