"...we were also able to obtain data on Erusea's unmanned fighter aircraft, which has long been veiled in secrecy."
― Mobius 1's commander following Operation Katina

The X-02 Wyvern,[a] also known as the X-02A, is a fifth-generation fighter aircraft developed by the Erusean Air and Space Administration. Its striking design is most notable for its variable geometry wings, which fold in at high speeds.

Ace Combat 7: Skies Unknown introduced the X-02S Strike Wyvern as the first variant of the X-02.

The X-02 Wyvern incorporates an uncommon design with variable geometry technology and a forward-swept wing configuration. As the aircraft gains speed, the forward-swept wings and vertical stabilizers fold inward and downward respectively to reduce air drag, and retract to their neutral position once it slows down. This unconventional design grants it an extreme degree of mobility and the folded wings add a degree of stealth.[2] However, this comes at a cost to the aircraft's armor (which is scaled back to provide such mobility) as well as its fuel capacity.[3] The aircraft is carrier-capable, though is equally capable of taking off from standard airfields.

The X-02 incorporates a weapons bay between the intakes on the underside of the aircraft. This weapons bay is capable of carrying all kinds of special weapons, including air-to-air missiles, air-to-surface missiles, and various bomblet dispensers. The aircraft's standard missiles are launched from downwards retractable holders located on the undersides of each intake. The X-02 is powered by two tri-dimensional thrust vectoring ERG-1000 engines.

The aircraft's specifications are as follows:[2][4]

In the 1980s, the Erusean Navy began to draw up concept plans for the development of a new combat aircraft. Sometime afterward, the Federal Erusea Air Force requested a new fighter aircraft. In response, Erusea's military decided to modify the Navy's new concept aircraft to also perform fighter duties for the Air Force.[2]

Preliminary blueprints of the new aircraft, known as the "X-02A", were completed on January 22, 1987.[5][6] Erusea's weapons arsenal primarily came from its neighboring countries, so their designs had an indirect influence on the X-02A's design.[2][7]

Over the next 10 years, the X-02A's development had ground to a halt for reasons unknown. After the existence of the Ulysses 1994XF04 asteroid was announced, Erusea—along with most other Usean countries—was solely focused on developing Stonehenge. Erusea would not return to the X-02A project until June 1998, after Stonehenge's completion. At that point, the EASA began development of the aircraft, now known as the X-02 Wyvern.[5]

Development continued until the start of the Continental War in 2003. Erusea planned to use the X-02s for the defending squadron of the captured Stonehenge network, but opposition groups questioned its large development costs when compared to proven conventional aircraft. Development was halted as the controversies went on.[2][4]

The X-02's development was hastily restarted after Stonehenge fell in April 2005, but it was hampered by a lack of funding and supplies due to the war.[2][4] Due to the X-02's unique variable geometry, the Independent State Allied Forces believed that Erusea was developing two different aircraft that were competing with each other.[2][7]

The X-02 was nearly set to enter production by September 2005, but ISAF captured Erusea's capital and ended the war, preventing the aircraft from being used to defend the capital.[2][4] The country continued development regardless, and within one year, at least four and at most six X-02 units were successfully completed. These units were equipped with an experimental UCAV configuration.[8]

In September 2006, the UCAV X-02s were stolen by Free Erusea during their continental uprising. They were used as a last resort during Mobius 1's attack on Free Erusea's base, a White Valley arms factory, but they were destroyed by the ace pilot.[8]

Under unknown circumstances, the Federation of Central Usea recovered the X-02's design blueprints. They produced a small number of test units of the aircraft, which caught the attention of international corporations.[9][10] One such company was Gründer Industries, who also produced at least one X-02 using their cost-cutting development techniques. This X-02 was sent to the Yuktobanian Air Force,[11] but it was later shot down over Osean territory. The pilot managed to eject.[12] The aircraft's remains were handed to the mechanics at Sand Island Air Force Base.[13]

A year after the Circum-Pacific War ended, an X-02 flew alongside an ADF-01 FALKEN and an ADFX-01 Morgan over November International Stadium in its first airshow since the war.[14]

pencil
We've still got some work for you, too, so don't slack off now.
This article or section is a stub. You can help by expanding it.
Main article: X-02S Strike Wyvern

In the Infinity universe, the X-02 was developed by an unknown country.[15] Its blueprints were later added to Wernher and Noah Enterprises's Advanced Automated Aviation Plant, including a variant used by an ace pilot to win countless wars by living "the way of the knight."[16]

"An air superiority/multirole fighter developed by a certain country.
It features special variable wings which adjust according to speed. The forward swept wing configuration allows it to demonstrate unparalleled combat abilities while its sweptback wing configuration gives it access to supercruise and stealth abilities.
The extreme visual differences between the wing configurations has often made people believe that there are 2 different aircraft. Its nickname is "Wyvern"."

The X-02 is available through the Aircraft Tree.

"An aircraft embodying the pinnacle of aerial technology developed by a country with major military power."
― Hangar 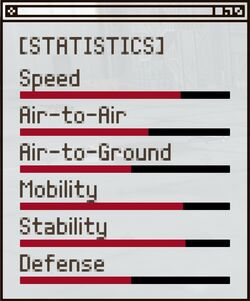 "A combination of stealth and exceptional agility made possible by its variable geometry wings."
― Hangar 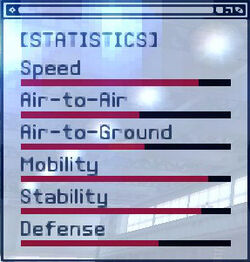 To unlock the X-02, the player must purchase at least one of every other aircraft in the game (except the ADF-01 FALKEN, which has no effect on the X-02) and then play any mission one time. Costs 39,700 per plane.

The X-02 is unlocked after completing two requirements:
The aircraft and the Erusean color scheme cost 1,414,000 credits each.