The XB-10 was developed some time prior to the Usean coup d'état as an advanced heavy bomber.[1]

Despite its main role as a bomber, the XB-10 has the ability to carry guns and missiles unlike its contemporaries such as the Bm-335 Lindwurm.[1]

During the Usean coup d'état, the Usean Rebel Forces had obtained these bombers after they had been produced. They were sent to Snider's Top to engage the Scarface Squadron. All deployed units were destroyed.[1] 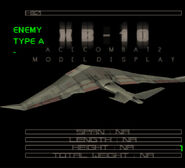 The XB-10 over Snider's Top

Retrieved from "https://acecombat.fandom.com/wiki/XB-10?oldid=261495"
Community content is available under CC-BY-SA unless otherwise noted.