The XFA-24A was a prototype multirole aircraft created in the 2010s in the post-Circum-Pacific War period by an unknown manufacturer. It was designed primarily as a multirole fighter capable of operation in all fronts, having been conceived under a philosophy of "not choosing the battlefield." Vaguely similar to a Rafale aircraft, it has a large fuel storage and weapons capacity on account of its double delta configuration.[1]

Owing to its manufacturing creed, it was designed to use conventional parts and components to remain active in the face of supply shortages, and does not exceed in any particular aspect of performance to maintain affordability. Its optimal operation is enhanced by the use of canards and 3D thrust vectoring without sacrificing its combat capabilities.[1] A particular software upgrade, the "Earth Shaker" system, enhanced its ground attack ability by digitally analyzing ground terrain.

A number of Apalis airframes were in possession of the Aurelian Air Force by the start of the Aurelian War in 2020. Such aircraft were employed by Falco One and Gryphus One during the counteroffensive to reclaim the country. Gryphus One in particular used the aircraft to destroy the Gleipnir airship over Santa Elva.[2][3]

The Apalis was made available for Antares Squadron during the Valahia Crisis.

"A respectable aircraft in all areas, the Apalis boasts unrivaled expandability."
― Hangar description

AVAILABILITY
Available at start of game in all versions.

The aircraft in hangar view

"A respectable aircraft in all areas, the Apalis boasts unrivaled expandability."
― Hangar description 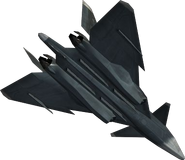 Retrieved from "https://acecombat.fandom.com/wiki/XFA-24A_Apalis?oldid=261013"
Community content is available under CC-BY-SA unless otherwise noted.